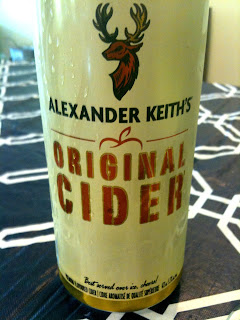 I like to review a wide variety of ciders. That's one of my primary goals for this blog, so when I got a cider unexpectedly a couple of weeks ago, I knew I had to review it. A Canadian tourist passed it along to a group of us United States cider folks, saying that it was a new Canadian cider. That's how I got access to Alexander Keith's Original Cider. It looks pretty sleek with that uber professional logo and graphic design, so I wonder how it has flown so completely under my radar.

Maybe I've just missed something, or perhaps I don't hear enough news of the Canadian cider scene. What's really interesting though is that as soon as you look at the back of the can, you can see that it isn't actually produced in Canada. Alexander Keith's Original Cider looks to be made in Baldwinsville, New York. Interesting. Also, when I looked up Alexander Keith's brewery, I discovered that after a long Canadian history it now belongs to Labatt which is owned by Anheuser–Busch InBev. Obviously, neither of these companies has much of a history with cider.

The company has a great website: http://keiths.ca. Again, beautiful graphic design, super quality photography(way to make me look bad, guys), and excellent functionality. It even has an interactive wheel that helps you generate tasting notes and suggested food pairings for all of their products (all of the rest or which are beers). Kinda neat! I do get some hesitation when I first see the suggestion, "Best served over ice," because that is not usually a good sign. A cider that needs ice is a cider that will benefit from being tasted less and less accurately.

Here's what the company says about their cider, "With a light and refreshing taste, Alexander Keith's
Original Cider has just the right balance of sweet and tart, and is best served over ice." The ABV on this is 5.5% and the cider can be purchased in pint cans, bottles, and on tap in some locations. Let's find out how it tastes. 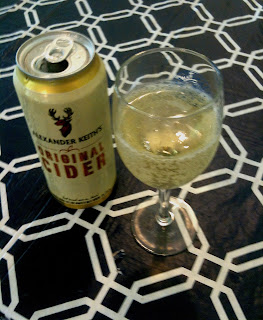 As the picture shows, Alexander Keith's Original Cider is very very bubbly in appearance. The bubbles cling to the side of the glass, form a ring at the surface of the cider, and rise profusely all through the liquid. I expect lots of carbonation.

I primarily smelled apple candy which is a very acidic sweet smell. One of my fellow tasters got notable levels of Malic acid which is associated with fruity sourness. Sometimes this is added to foods or drinks to enhance their flavors.

Again that candy and sour sweetness from the aroma really comes through when drinking this cider.

The carbonation levels are high but not shockingly so. The apple taste is dominated by sugar and doesn't fill the mouth. I feel like this is a thin beverage. The finish includes chemicals and shampoo. After thinking a it, I could taste hints of Ammonia. Again one ofmy fellow tasters was able to give me some more detailed information. What I smelled as Ammonia is diamonium phosphate which is used in place of yeast nutrient sometimes in brewing. This isn't a very enjoyable beverage for me, I'm sad to say.

To be fair, I think folks who enjoy commercial 6 pack ciders or who like other InBev offerings might add this to their repertoire. As for me, I'm glad to have gotten the chance to try something for free that is being marketed in Canada. I also definitely see a value in checking out both the artisanal and commercial extreme ends of the cider spectrum periodically to what is going on all over the market. Thanks also to my fellow tasters, I learned a lot.