I realize that I am not always an organized person. This leads to me having scattered bits of cider notes in my phone, in my husband's phone, and on every computer I ever approach. It is a problem, perhaps. Eh. Besides not being able to find what I want at the moment I want it, there is an upside. Sometimes I find sets of cider notes that I thought had been lost forever. That's the story of this post.

Dear friends of mine host dinner at their home most Thursday evenings. I frequently bring ciders and write up my notes there. Last Thursday I brought Angry Orchard's new Ciderhouse offering, The Muse. This was a very nice coincidence because someone else brought a six pack of the brand's Traditional Dry. I thought doing a double-header Angry Orchard post might be a good way to actually see what's going on with both of those ciders. So we did notes and pictures and several folks gave me their impressions. Then we all ate way too much delicious food: two vegetable based no pasta lasagnas, two meat lasagnas, and a vegan pesto with sun-dried tomatoes and walnuts. Then milkshakes made with local ice cream. And we do stuff like this every week and most weekends. It is a good thing.

Once I recovered from my food coma, I realized that I've really not covered Angry Orchard's offering very much in this blog. I don't drink them often, so they don't show up. This is a real oversight on my part because so many other folks drink Angry Orchard a lot. Depending on who you ask, Angry Orchard might sell the most cider in the United States these days.

So this post aims to fix that. Here are three Angry Orchard reviews appearing together. I'll go in the order what I liked most to least.

This is the only Ciderhouse selection that I've liked enough to purchase more than once. Definitely my favorite. I'll let Angry Orchard explain what they were going for with this particular cider.

For centuries Farmhouse Cider making has been a tradition celebrated by farmers in the English and French countryside. Strawman combines a distinct blend of juices from traditional culinary and bittersweet apples, which is then aged on oak. The result is a full-flavored, complex, and balanced cider with wine-like characteristics, rounded out by apple and citrus notes. Its lingering, earthy finish is an homage to the origins of this unique cider. 10% ABV.

In the glass, this cider looks deeply colorful like a brand new penny. It does create an unusual amount of foam when poured. Not brilliant but more hazy. It does look more like an english style cider, especially when compared with Angry Orchard's other ciders.

The Strawman exudes a strongly alcoholic scent, but it is not fruit-forward. I get more dust and minerals than fruit. Maybe, I can smell a little pear and wine. There is definitely some straw and hay smells, but the cider does not smell farmy. Once the cider warms up a bit in my glass, fruit scents of overripe apple emerge, but that took some time.

Wow! Angry Orchard is capable of making a dry cider. I would never have guessed. What I find particularly fascinating is that the official product description does not place it on a dry to sweet scale. Pleasantly tart with some fruit that still remains dry.

My first impression is of the high  but not soda-like levels of carbonation. I like a lot of bubbles and this delivers almost more than enough. Strawman's very high alcohol content makes for a lingering warmth; it recalls a harder drink in its aftertaste. Though the cider is dry, it's mouthfeel is so coating and full as to be slightly cloying. I note an immediate aftertaste of wood which is where the medium level of tannins come out. There's a lot going on, but I like it.

One of Angry Orchard's "core ciders," the Traditional Dry is one of the most widely available ciders across the United States. I'm curious to see Angry Orchard's interpretation of both traditional and dry. I have my suspicions that I might disagree on one if not both. I found a few different descriptions on the Angry Orchard website, including: "This traditional English-style cider is bittersweet and slightly spicy with a bright apple aroma and a dryness that makes you pucker."

These online tasting notes give a bit more information, "Our Traditional Dry cider is made in the style of English draft ciders. This cider is bittersweet and slightly spicy with a bright apple aroma. It is a leaner cider with a dry finish and without any juice added to impart extra sweetness." The cider has a more standard ABV of 5.5 and the color is listed as amber. I have my doubts about the color description considering almost any cider or beer coincides with one shade or another of amber, but I'm heartened to see some suggested food pairings; they are:
Now let's actually try the Traditional Dry.

Like the Strawman, Angry Orchard's Traditional dry has a darker color than most ciders. this one looks a bit less warm and orange and more rich caramel brown. No haziness here, just brilliant clear cider with almost no visible bubbles.

Aromas: Not a lot of smell, a bit bready and dusty.

This cider does not offer much in the way of aroma. I poured half of the bottle into a wine glass in an attempt to open up the aromas and make them more perceivable, but I didn't get much more. When I try I can smell some yeasty bready notes and similar hints of dust and must like I get from the Strawman. Not much going on.

Though I could not smell much sweetness on the nose, this cider is not truly dry. I cannot say that I am surprised; many many many ciders sell themselves as dryer than they taste. This isn't completely sweet either though and the sweetness I get is a fresh fruit sweetness. More on that in the flavors section.

To my tastebuds, The Traditional Dry divides into a thin fruity layer of taste and a much larger watery one. This cider falls right in the midle of what I am reviewing to day in terms of sweetness; it tastes drier that the Muse but still not dry. I taste plenty of grapes, either juicy white or concord depending on who you trust. Everyone tasting this cider got grape notes but we did not agree on the details. The finish is mostly clean but sweetness lingers. I can definitely tastes the added citric acid. Overall, it tastes cleaner and colder than either the Muse or the Strawman; I think the lower ABV of 5.5% versus Muse's 7.7% and Strawman's 10%. 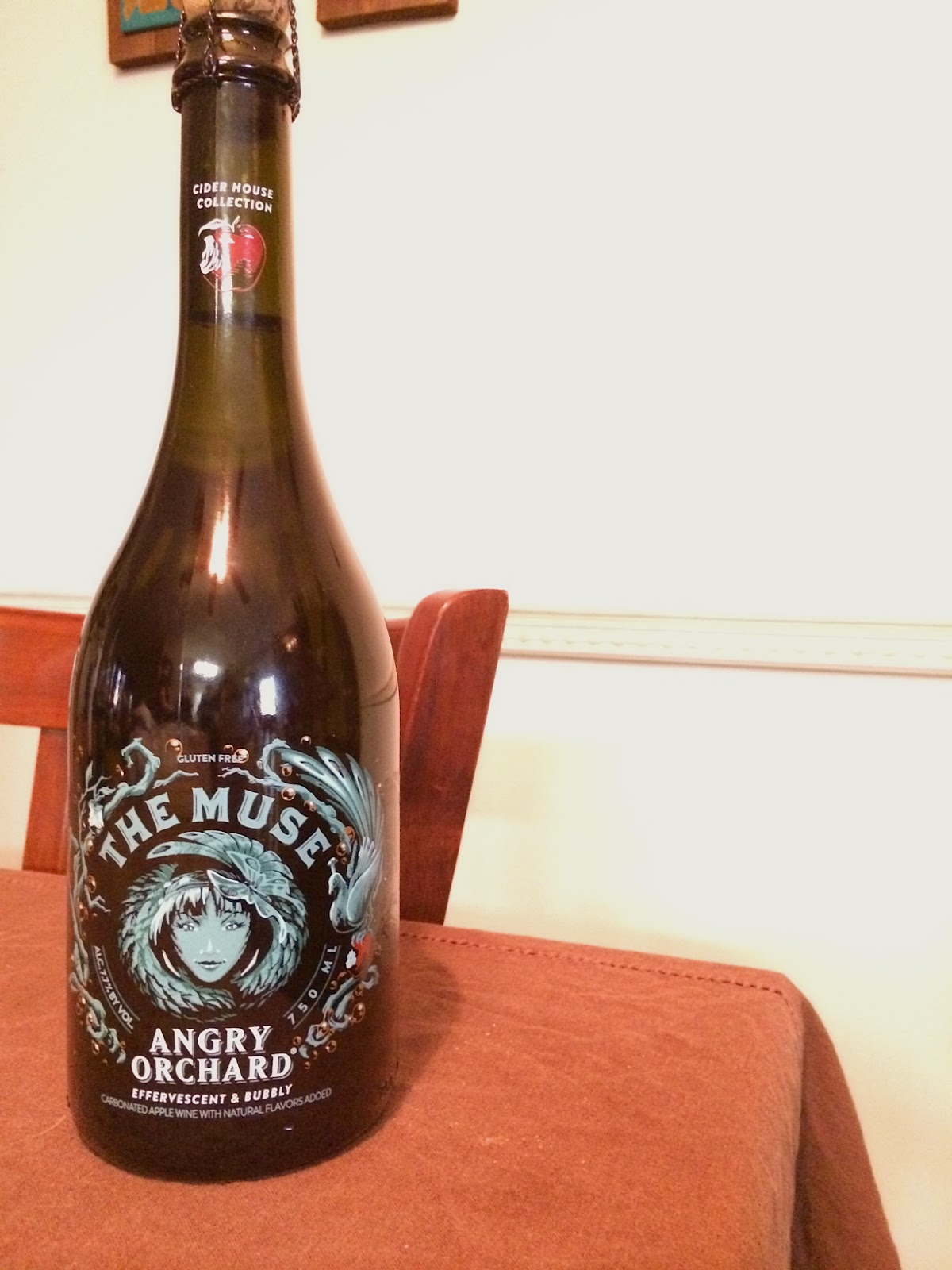 This was the cider that I felt compelled to share with my friends at dinner, and yet this is the cider that comes in last in my group of three. I do love the bottle though. This is not a bad cider, it just goes for a number of goals that aren't my favorites. Here's what Angry Orchard has to say about this one.

Inspired by the festive nature of slightly sweet demi-sec champagnes and sparkling wines, The Muse is a bubbly, effervescent cider made from traditional culinary and bittersweet apples and aged on French oak. The cider is sweet upfront with a juicy apple aroma and bright acidity, and slightly drying on the finish with a lingering sweet apple note. The French oak adds a subtle wood impression, imparting notes of clove, cinnamon, nutmeg, allspice and hints of vanilla. 7.7% ABV 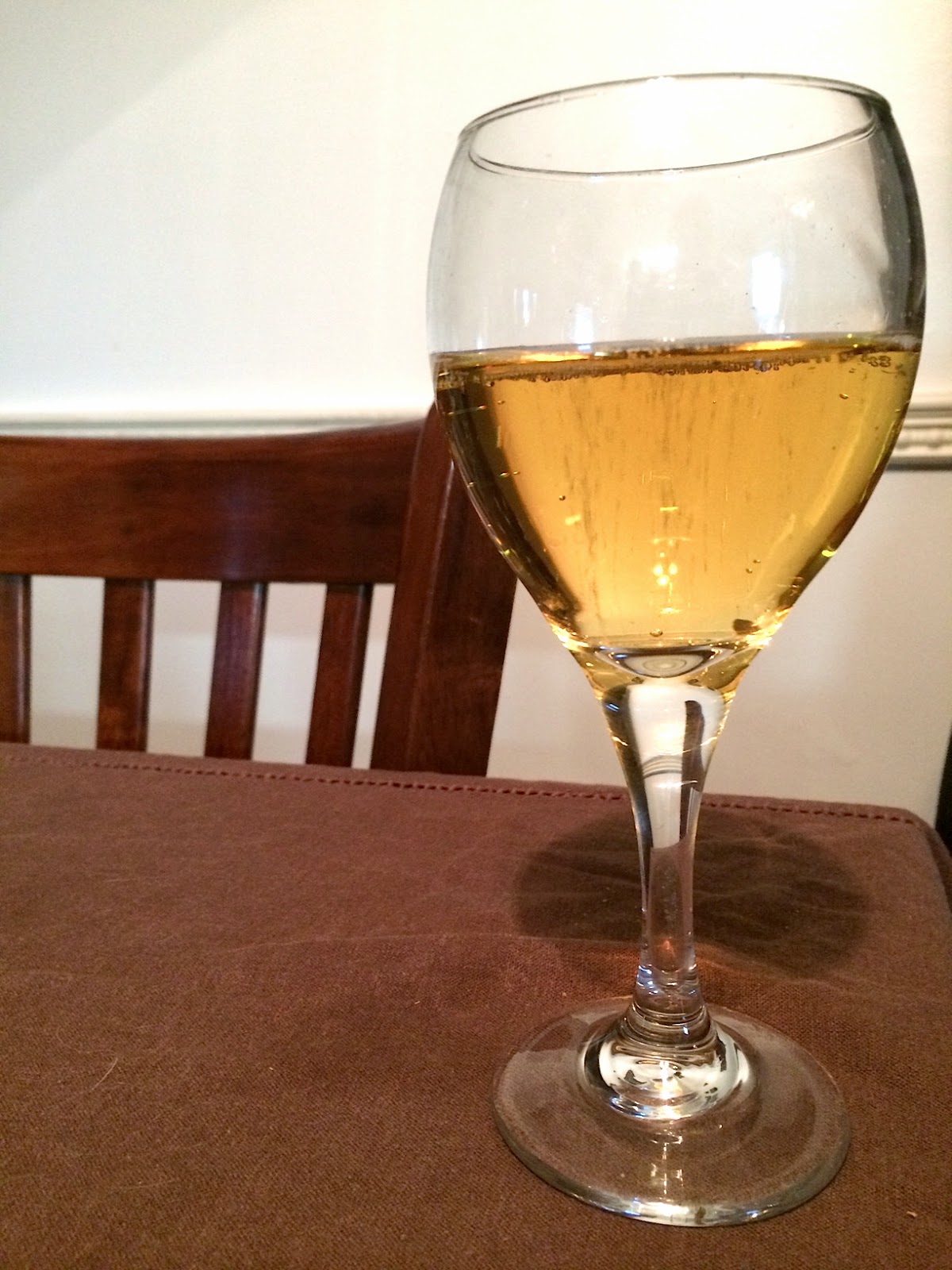 This was the lightest of the three reviewed here, and still this is a more pronounced color than many ciders. I see this color as a rich apricot. You can see all of the motion of the bubbles in this shot; it looks a bit champagne like in that regard. This is also an extremely brilliant cider. I would have no trouble reading text right through it.

Angry Orchard's Muse definitely has more going on in the aroma department than their other ciders. I cannot quite tell how these notes of sweetness, sourness, fruit and oak will translate into taste, but I do expect some depth of flavor and sweetness.

This is where the french cider influence is coming in. Many Normandy ciders have some real sweetness to them but also complexity, woodiness, and farminess. Angry Orchard imitated the level of carbonation and aroma but didn't really obtain the necessary complexity to give the cider enough identity.

My biggest disappointment with this cider is that the flavor goes a little candyish at the midpalate. The Muse drinks pleasantly, a little French, very nice minerals, not outweighed by its caramel flavor. In terms of fruit, I mostly taste lychee rather than apple. The Muse has been carbonated brightly with tons of big bubbles making it a little soda-esque. The phrase on the bottle "Carbonated apple wine" should have led me to expect that, but I was so distracted by the mention of oak that I completely passed it up.

There you have it folks, I've been trying a few Angry Orchard ciders here and there, but now I've organized my thoughts and put them together. If you want to go back to my Angry Orchard Elderflower review from last year, you can find it here: http://alongcameacider.blogspot.com/2013/06/cider-review-angry-orchards-elderflower.html

What do you think? Should I track down their other flavors? Does the combination format work?
Posted by Meredith at 10:03 AM