Woodchuck has been kind enough to send me several of their Cellar Series ciders for review. In fact, I got Woodchuck's Cellar Series Chocolate back in January. It has been sitting in my fridge and then in my cider fridge for far too long. Mostly because I had some trepidation about a chocolate cider. This is the third cider released in the Cellar Series line, though it was released in time for Valentine’s Day, I'm only just now trying it. Apologies to Woodchuck and all of its fans. Nonetheless, I have really enjoyed both of Woodchuck's previous Cellar Series offerings.

Here's my review of their Dry Hopped (I'll definitely be picking up more of that one when I can.)

This is my review of the oh-so-bacony Smoked Apple


If you want to find out official information about Woodchuck as a company or about any of their ciders, you can visit their website at:  http://woodchuck.com

The big talk about Woodchuck these days is that they have a new cidery facility opening up in August. The company is hosting a huge concert and party to celebrate and calling it a Ciderbration. Very cute. I might try to make it up. The drive to Vermont is beautiful, and I love getting to meet fellow cider freaks.

Setting aside all fears aside about combining two of my favorite things in the world, cider and chocolate, let's take a look at what Woodchuck says about this entry into their Cellar Series lineup.

Woodchuck’s original small batch hard cider, featuring Vermont culinary apple varieties such as McIntosh and late season Northern Spy, was aged with crushed cocao beans. Cocao beans, or nibs, are the starting point from which chocolate is produced. The infusion of the cocao nibs bring notes of artisan chocolate throughout the nose and taste of the cider. A hint of caramel accompanies the dry finish, as does a full apple flavor.
“The use of crushed cocao nibs allowed for this cider to showcase chocolate’s true character,” says Cider Maker John Matson. “The infusion of the beans brought out those strong natural chocolate notes, without the sweetness found in a chocolate bar. The balance of the apple against the cocao creates a truly distinctive tasting experience. I am thrilled with the result and hope our fans are too.”
Cellar Series Chocolate represents one of the most unique ciders Woodchuck has ever brought to market. It deepens the commitment to crafting cider styles that push the category forward while exposing cider to an ever-growing audience.
Cellar Series Chocolate is pasteurized and featured in a 22oz bottle. Alcohol by volume (ABV) is 6.9%. 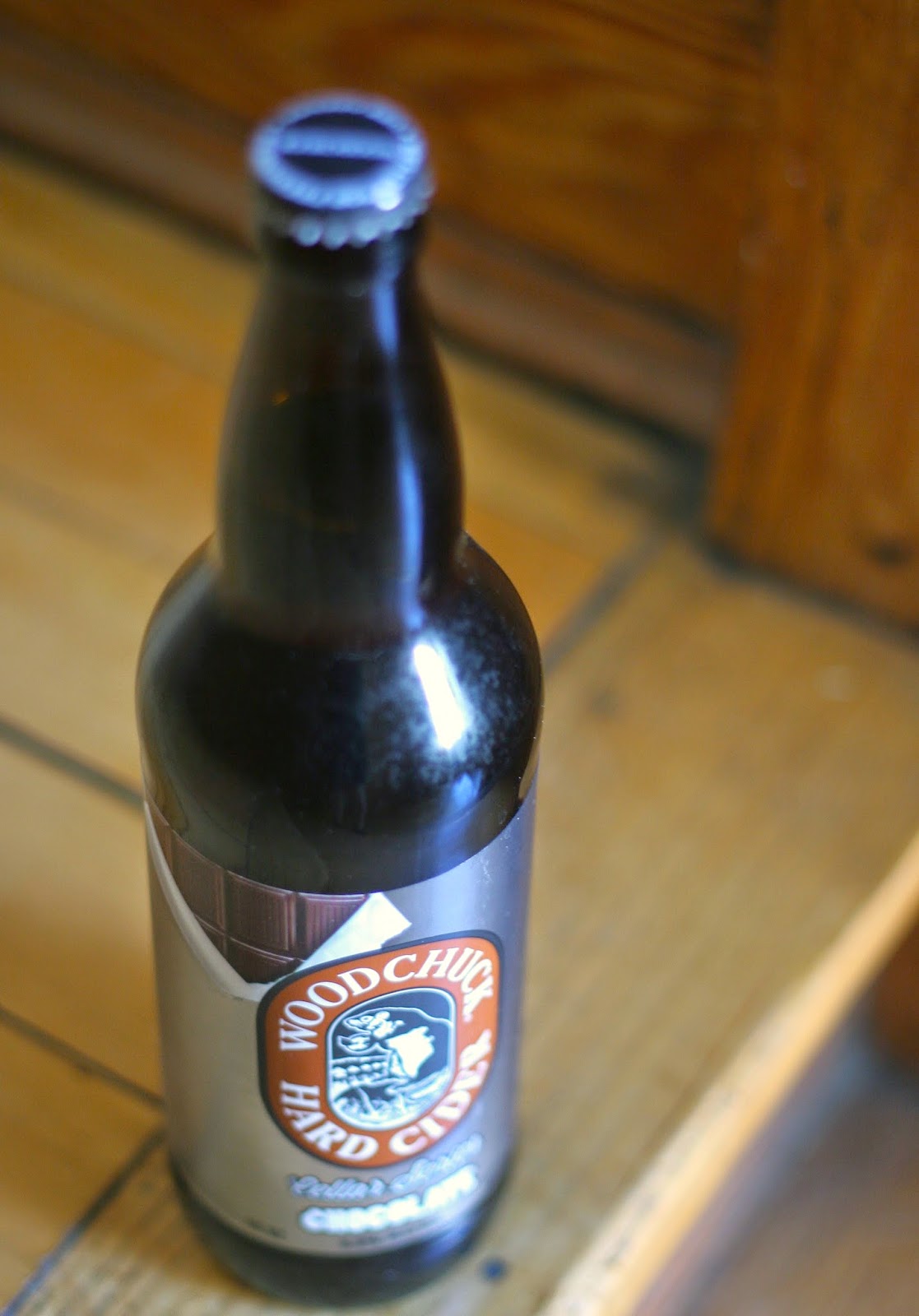 When poured, the Woochuck Chocolate has a color much like cocoa powder, deeply red brown. Though the color is too dark to read through, it is a brilliant cider.  I can see plenty of bubbles, enough to expect that this cider will be pleasantly carbonated.

Whoa! I am amazed by how many different smells come out of this. First, I smell a rich and fruity balsamic vinegar. Something dark and intense. Secondarily, I smell milk chocolate. Underneath both of those scents, one can grasp hints of ripe apple, but the chocolate and balsamic smells are far more forward.

One of the folks with whom I was tasting this suggested that this cider might smell and taste good warm. So, we microwaved a little bit of it. This cider smells much boozier when warm but retains both the chocolate and balsamic elements.

Apples and chocolate with caramel as well. The sweetness reminds of the whole fondue experience of dipping apples in various warm sweet sauces. In this case perhaps like a freshly cut eating apple dipped into milk chocolate and caramel.

For some, drinking this cider reminded them of sweeter gentler version of whiskey. Something rich but not cloying, a little fresh even. I believe on comment that I noted verbatim, "Like booze without the booze!" I know I wouldn't go that far, but the comment is on to something. This cider tastes extremely dessert-like, but feels warming to the throat and stomach. It doesn't taste like something that would give that warming effect, and yet it does. The carbonation levels are lovely, just about ideal.

I think bringing the creaminess of milk chocolate to a tart and sometimes acidic beverage kept this from coming together into one seamless experience. I was always experiencing cider and chocolate rather than a truly chocolatey cider.


I enjoyed this cider around a kitchen table with some good friends and my own homemade raspberry cobbler. Though we tried this warmed as well as cold, I strongly recommend serving this chilled. I think it is a fairly good dessert cider, though the combination of chocolate and cider still doesn't 100% work for me. Give it a try over some ice cream perhaps or with some very mild cheeses and a baguette.