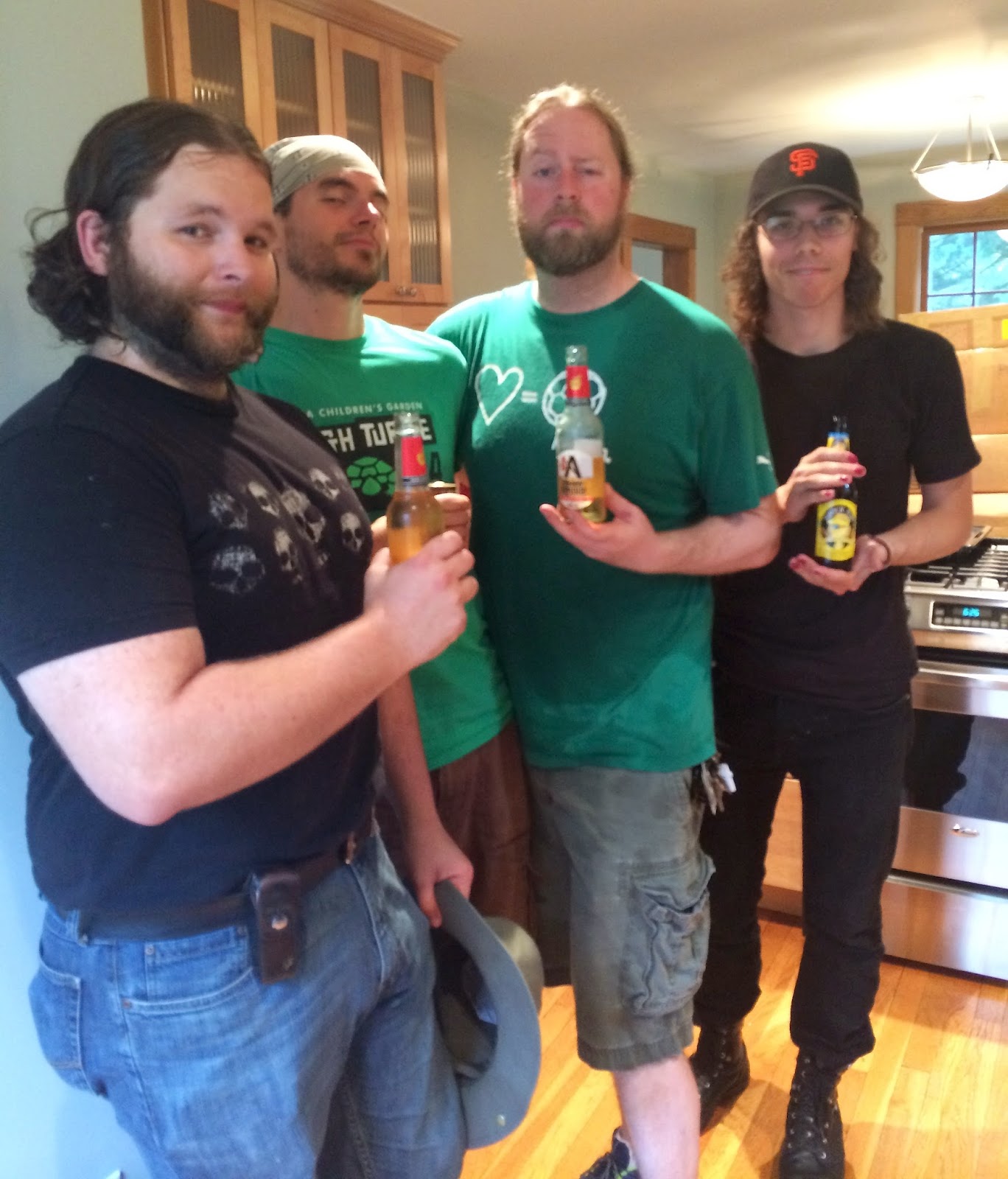 This roundup review is a little bit of a stretch backwards in time, but I really don't want the rest of 2014 to slip by without reviewing a few of the new entries into the grocery store cider market. I use this term in particular because where a cider is sold has so much to do with who sees it and who buys it. More folks see the ciders in supermarkets than in wine or beer specialty stores, so this seems significant. 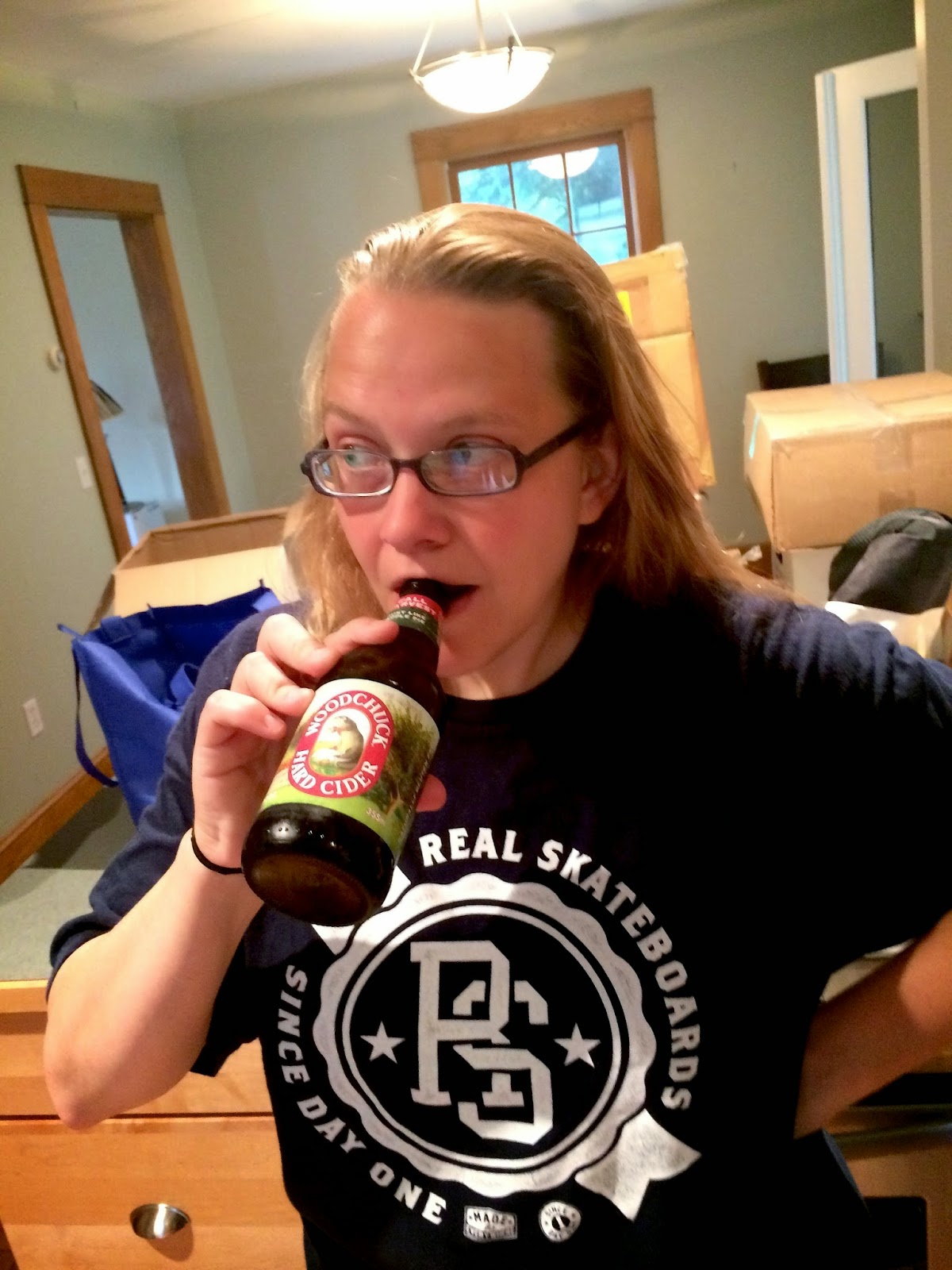 Along Came a Cider Headquarters moved this August. Luckily I had a hardy crew of about a dozen friends to help. Traditionally the reward for a moving crew of this type is pizza and beer, but my friends agreed to not only move my stuff but also help me taste and review a number of new ciders for the reward of pizza and eternal fame and glory, of course.

Everyone was a great help in moving and even better sports about being cider guinea pigs afterwards. they even let me take silly pictures of them. We had tons of pizza and spoke pretty candidly about this varied crop of ciders. 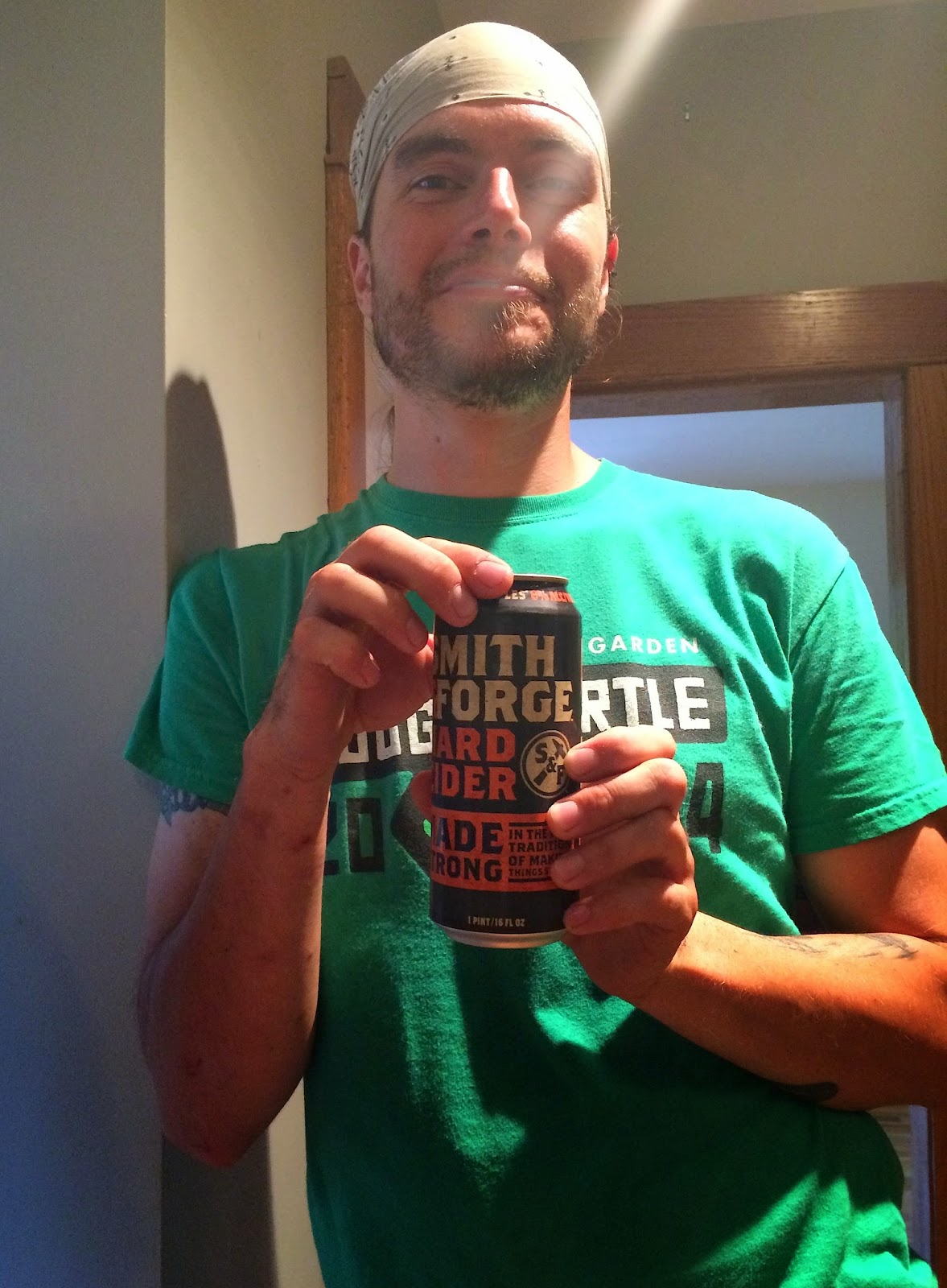 And Now for The Ciders: 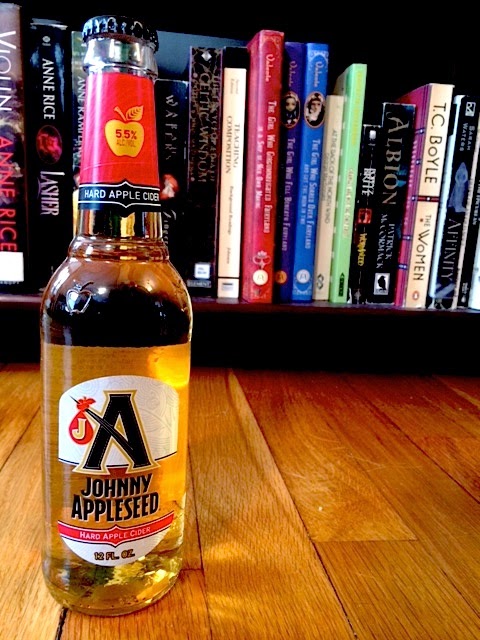 This cider is certainly the one I see advertised the most around here since its release. Ads appear on Twitter regularly and I know I've seen them elsewhere. This is Anheiser Busch's cider and the only one of the new crop of grocery store ciders to advertise its sweetness as a feature. Here's what they have to say about their cider.

This has the most chemical or artificial notes of any of the ciders we tried. Everyone noticed that though the cider has a pleasant appley first note it gets way too sweet and fake tasting. Specifically this tastes like green apple candy. This is especially noticeable because of the simultaneous stickiness and thin mouthfeel. Not a winner for any of us. 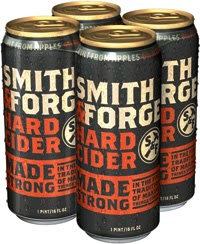 First, let me share some of official press release for this cider including the fabulously clear headline, "Presenting Smith & Forge Hard Cider: A Sturdy Drink for the Hardy Gent." Alrighty, this is a cider being marketed as manly and for men. Here's more from MillerCoor's exec Kroll, “There was a time when more hard cider was consumed in America than beer.  Now hard cider is exploding again, but the sweetness of many current ciders can be a turn off to beer drinkers, and some of them are looking instead to spirits and crafts for variety,” said David Kroll, MillerCoors vice president of insights and innovation. “Smith & Forge is a strong, just-sweet-enough hard cider that encourages guys to discover -- or rediscover -- the world of hard cider.”

“Once upon a time, barrel-chested men proudly drank tankards of hard cider,” continued Kroll. “Smith & Forge is honoring those times by bringing back the sturdy side of hard cider.”
One of my guest reviewers said, "This tastes exactly like apple juice. This is something my six year old would enjoy." I'm pretty sure he thought that was a bad thing even though he enjoyed the beverage enough to finish it.

In looking at the website now for Smith and Forge it seems to take a lighter view of its obvious targeting of a male demographic with jokes about mining, biceps, taverns and a general manly old-timey, moustache-loving vibe. Cute but feels artificial.

My word on the cider: it does tastes the most like fresh unfermented juice of any alcholic cider I've tasted above an ABV of 3% and yet this has an ABV of 6%, so I think the level of backsweetening and post-fermentation flavoring must be intense. 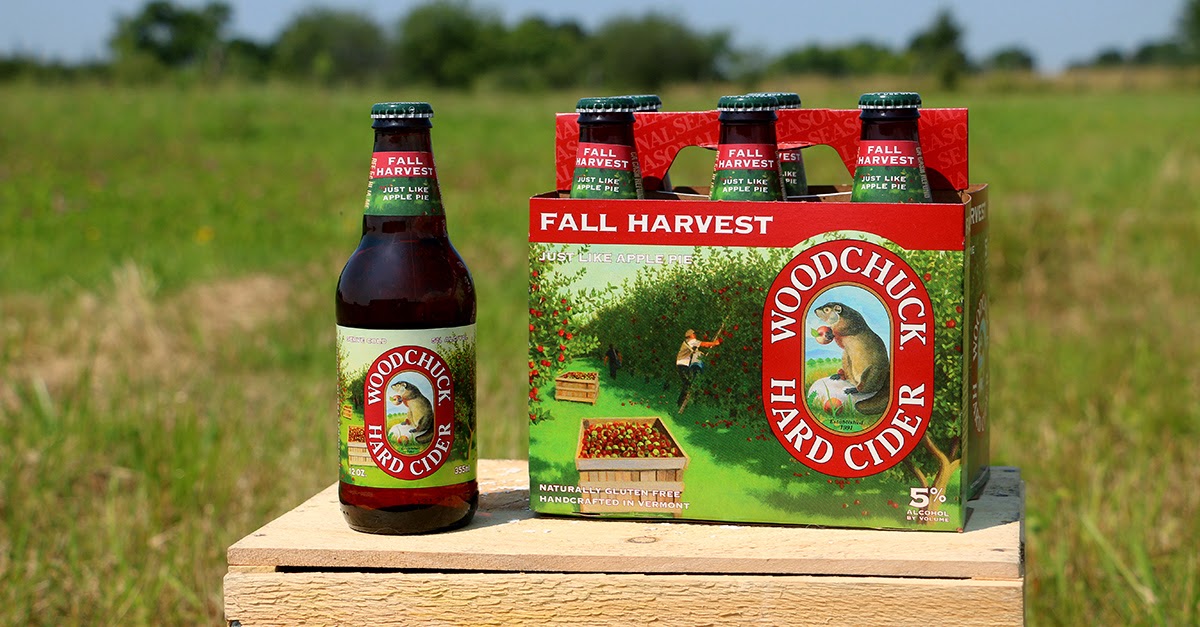 (Many thanks to Woodchuck for letting me borrow one of their promo pics. I really wanted to show off their packaging and this photo does it.)

This is the cider I've had the most experience with before sharing it with my friends/movers, but we'll start with what Woodchuck has to say about it


The fall harvest brings farmers and communities together to celebrate another year of fruitful labor, It is a time of shorter days, cooler night, and great apples. This cider has a complex and elegant character full of apple, cinnamon, and nutmeg balanced out with a hint of American White Oak. A true taste of the season.

My friendly movers had a lot more to say about the spices of this cider than the fruit or apple characteristics. The most common observations were about the apple pie similarities, questions about mulling this cider, and mentions of a brown sugar finish. We all expected it to be sweet, so there were no surprises there. 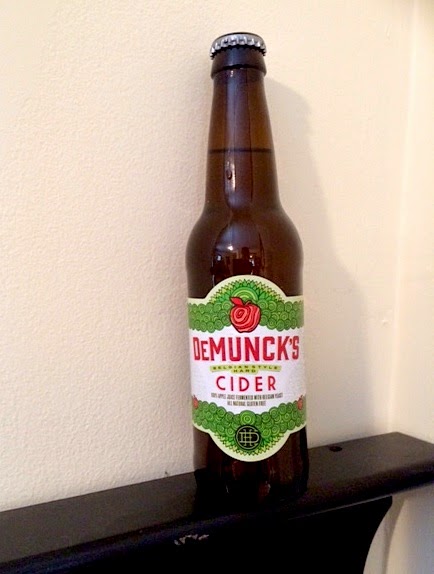 Wow! This is some confrontational copy. I knew this cider would be a little different as the first cider by a regional microbrewery (Southern Tier) but they don't let us forget it. Take a look.


If you like artificial cider made from imported, concentrated apple juice, filled with caramel color, sweetened with corn syrup, and containing more than 200 calories per serving, we recommend you look elsewhere. It makes us angry that so many ciders are made with apples from orchards on other continents.

We ferment 100% pure apple juice with our house Belgian Abbey Ale yeast for a very special hard cider. Made in small batches, DeMunck's Hard Cider is smooth, easy to drink and naturally gluten-free.

My tasters and myself all noticed that this cider hits with an initial half moment of bitterness and some beer-like aromas. The meaning of Belgian style becomes clear, they are using a Belgian beer yeast. This is good to know because I don't actually know of any particularly Belgian cider traditions in either the creation or consumption of cider. Perhaps if I'd read more carefully I would have noticed the website saying, "Fermented with Belgian Abbey Ale Yeast" sooner. Oh well.

This cider is the only one of these I've bought again since the moving party. Though I think the finish is a bit odd with some powdered sugar and bing cherry flavors, it is a nice well balanced cider.

Overall, we liked the DeMunck's best with a tie for second place between the seasonal Woodchuck and Smith and Forge. Pizza and thirst were ideal accompaniments for all.
Posted by Meredith at 1:19 PM