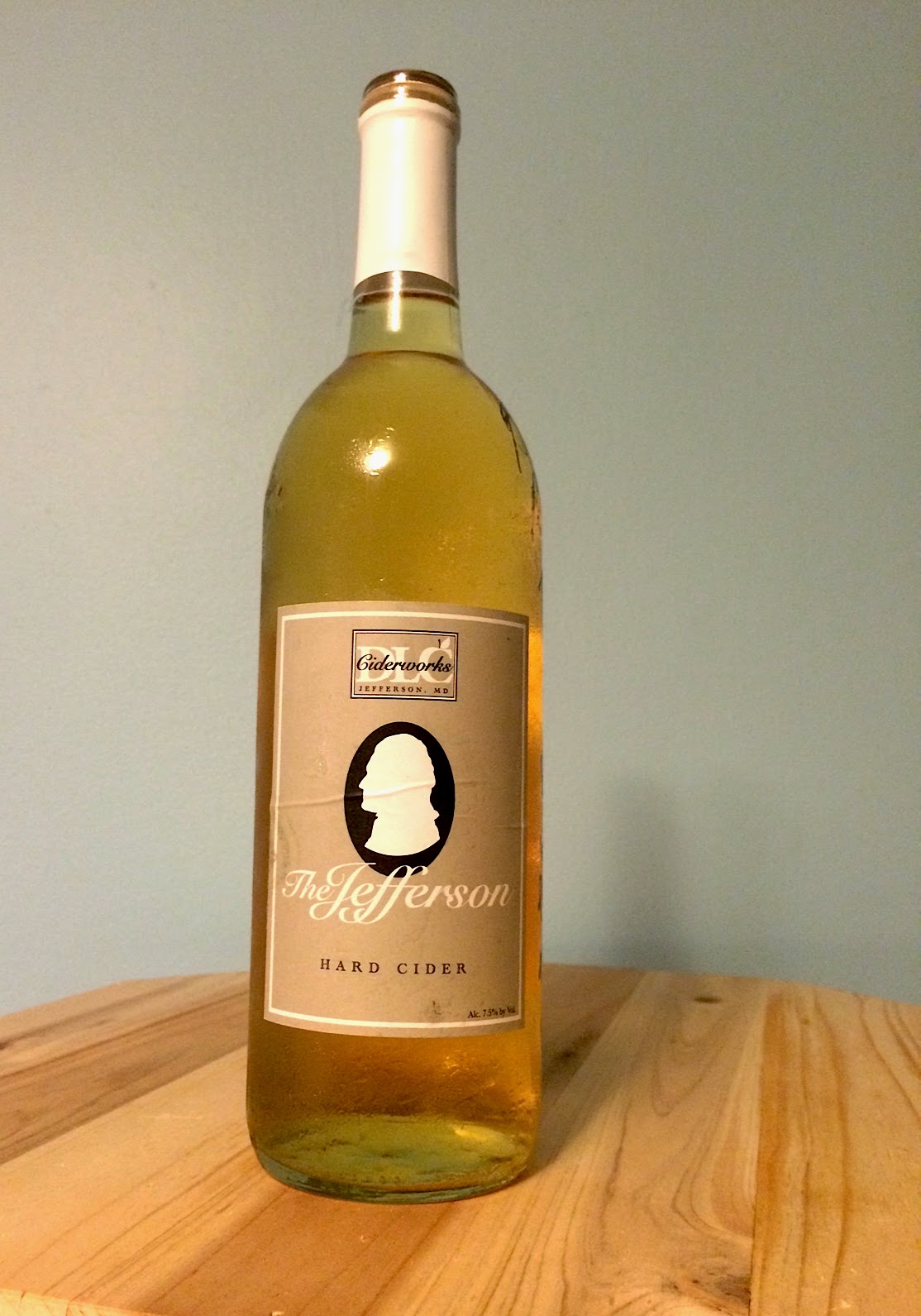 Casual at-home dinners with friends are the mainstay of my social calendar. I prefer them to most other kinds of hanging out year round, but I appreciate them even more when the weather is cold and going out just sounds uninviting. What could be better than a nice meal with wonderful people? With cider. And dessert. And more cider with dessert. Besides, I think cider pairings are much easier to coordinate this way. So, before I get cooking for tonight's dinner, I though I'd post about another cider that I've only experienced as my contribution to a friend's little supper gathering.

This is yet another of my Mid-Atlantic ciders shared with me by Patrick Huff, writer of Cider Nation (http://cidernation.wordpress.com) and Crafty and The Beast (http://craftyandthebeast.com). He also coordinates regular cider chats on Twitter under the hashtag #ciderchat. These happen most Thursday evenings; he often hosts cidermakers or other field experts for good times.

And here's a link to my review of their Traditional Dry Sparkling Cider:
http://alongcameacider.blogspot.com/2013/08/cider-review-distillery-lane-ciderworks.html


Thomas Jefferson was a renowned cidermaker and orchardist in his time. One of his favorite apples was the Newtown Pippin, an apple first grown in New York. Historically, this apple was exported in large quantities to Great Britain (the Queen liked Newtown Pippins so much that British Parliament lifted the import duty only on this apple variety). It is no surprise that the Queen liked the Newtown Pippins so much: on a trip to Europe, Jefferson once notoriously declared, “they have no apples here to compare with our Newtown Pippin!” For our hard cider, The Jefferson, we press Newtown Pippins, along with other vintage cider apples, to create an off-dry cider. The cider is also aged with American oak to achieve an old-time flavor, reminiscent of the oak barrels that Jefferson would have used when brewing his ciders. The Jefferson is perfect with smoked fish and meat. 2014 GLINTCAP gold medal winner.

One last fact to note before we get started; this cider offers up a hearty ABV of 7.5%. 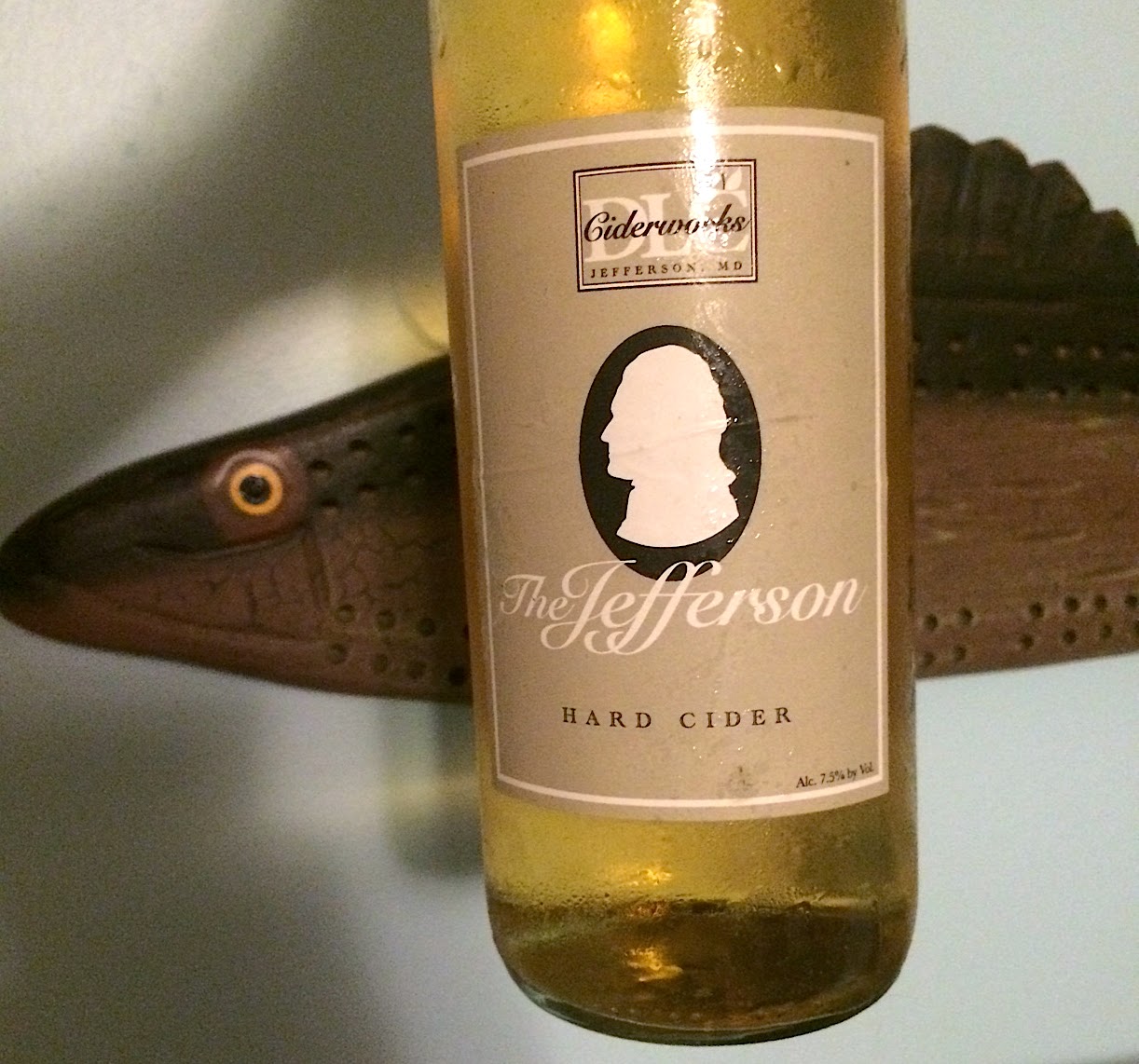 At first I thought the color was copper mixes with grass, but my dinner companions questioned this. More yellow and less orange, they said. We thought some more and agreed on a mellow brass color. It doesn't show any bubbles, which indicates to me that this could be a still cider. Brilliant with zero haze.

None of us smelled very much fruit on the nose of this cider. I smelled butterscotch, which most folks found as well. Someone said it smelled like booze or like a heavily-oaked chardonnay. The aromas aren't particularly strong.

Now that we're all tasting this, a few people are getting more fruit, but the oak and tannins dominated the experience for me and a couple of my fellow tasters. The official description of off dry is arguably accurate, but I feel like it would be just as fair to nudge that up to a semi-dry. There is some sweetness, but not very much.

Wow! Such an interesting experience! This is 98% still— the petillance is almost like a very weak 9 volt battery on the tongue, just a tingle and no more. The primary flavors different folks observed were minerals, green apple, vinousness, butterscotch, and popcorn. The mouthfeel was a touch light and thin, which I only notice particularly because the oak flavors don't seem to combine naturally with such a light mouthfeel. The booziness does warm the mouth but that's the primary tactile sensation.The Jefferson provides lots of different flavors, light and dark, pleasant and interesting enough, but they don't really interact in a way that offers up totally coherent complexity. It tastes toi me like the tannins could be from oak chips or rods, and not the more mellow oak of barrels. I'm not 100% certain though.

We shared this with a homemade pasta dish with cream sauce, broccoli, and mushrooms. Meat eaters added some roast chicken as well. I do think the seasonality and warmth of everything paired well together. The Jefferson certainly does strike me as a winter cider.

Though I'd love to ramble more about the pleasures of ciders and dinners and good company, it is time for me to get up and go to the kitchen to prepare for tonight's dinner party adventure. Cheers! Here's to a happy and tasty 2015!