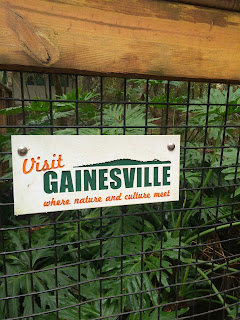 The day that this post goes up, I'll be flying back hom from London after walking many many miles and drinking a few ciders around Cornwall. So, I'm sharing a review from notes taken on a previous trip: my winter escape vacation to Gainesville, Florida. The cider we notated that day was Doc's Draft Hard Cassis Cider. This is another one that as soon as I drank it, I knew I'd want to save the review for warmer weather.

As always, you can find there website here: http://wvwinery.com/cider

I've reviewed most releases by Doc's Draft. Here's a quick list of the reviews with links:

The only ones I'm missing are their Pear, Raspberry, and Black Cherry and some special releases that aren't on the main website. We'll see if I get to them all eventually, but I might have to beg the skills of a guest reviewer for anything black cherry. Any volunteers?

When Doc's Draft says Hard Cassis Cider, they mean cider that somehow uses black currant in addition to apple. While cassis has generally come to mean a liquor made from black currants, that term is technically Crème de cassis. That is made from soaking crushed black currant berries in a neutral spirit and sweetening the mixture before straining it. This is a dreadful oversimplification, but it covers the basics. To get even more basic, black currants are a very tart berry common in European and UK foods and beverages as a fruit flavor. Due to various quirks of botany and history, currant have become, at various times, illegal or  uncommon in North America. They have been legal in New York state since 2003, so don't worry; Doc's Draft isn't skirting the law by making a cassis cider!

Doc's Draft's official Description reads, "A unique, hand-crafted black currant hard cider, made from pressed NY state apples and fresh black currants. (6% alcohol)" What this definition doesn't tell me is how and when the black currants and apples were combined, but I'm guessing taste will tell me some of that. 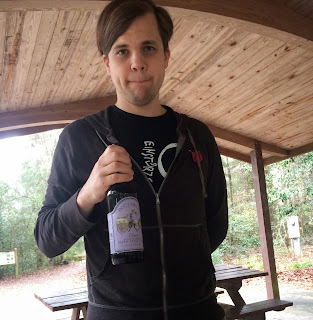 Apologies for not having a picture of the cider in the glass. Perhaps the cuteness of my husband and his appearance making a funny face in the photo will compensate. ; )

This cider looks jeweled to me because it is so brilliant. I'd call the color dark rose. I've seen other black currant ciders with darker colors, but this particular shade of pink is appealing and lovely.

The aromas coming from this cider are fascinating. I smell grape jelly with bits of apple skin, but primarily I just smell lots of grape jelly.

Like most cider's from Doc's Draft, this cider has a fair bit of sweetness to it. I like it with this cider, and, in my opinion, a black currant cider needs a certain amount of sweetness to balance the tartness of the berry's flavors.

Doc's Draft deserves a round of applause for making this cider so approachable yet so multi-faceted. It is interesting and delighful. First, I can taste a bitter front edge, then the cider goes sweet quickly and then comes the woodsmoke after swallowing.  It tastes like a crushed handful of real currants with that same balance of bitter and sweet. I love the rustic woodsy flavor. The finish is sweet at first but a second later, the alcohol hits with a solid aroma of woodsmoke. Doc's Draft ciders are often a hint yeasty and this is pleasantly no exception. This quality works well with the juiciness of the currants. I like that it is decidedly sweet and bubbly and dark, but not sticky or dumb. Apple is still markedly present at the base, with the currant as a flourish atop it. Clean and piney finish along with the woodsmoke. 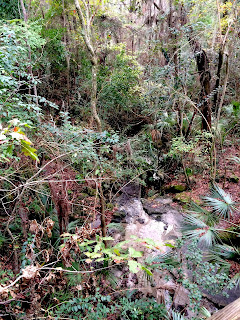 I had this cider on a picnic with wonderful much-missed friends. We had brie and grapes and strawberries and hummus and cucumber sandwiches. That was the perfect way to enjoy this cider, if you ask me.
Posted by Meredith at 7:30 AM