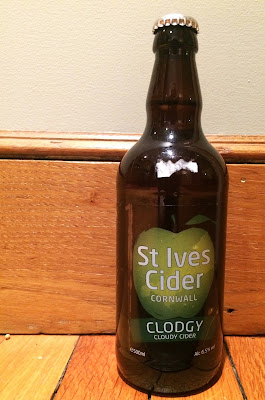 Though we are have rather gloriously unseasonable weather, this is only the very beginning of March. I'm longing for spring, sunshine, and flowers, so I decided to open up a cider from my vacation last may to Cornwall. Glorious and sunny England doesn't sound like the stereotype, but we had days of it walking the South West Coast Path.

So, I decided to open up my sole bottle of St. Ives Cider from Cornwall. I chose their Clodgy because its unfiltered and I don't get access to very many unfiltered ciders in my region.

St. Ives is the cider project of David and Kate Berwick, taking his wine background and, according to the website, traditional cider-making techniques. St. Ives makes three ciders and a perry. This is my first review and first taste of anything by St. Ives Cider.

The only difference is we use a small amount of dessert apple juice in the blend to lower the acidity and make a slightly smoother flavour.


You will find some sediment will drop to the bottom of the bottle if stored. This is completely natural and can be poured off gently or shaken before serving to give a yeastier taste.

Clodgy Bag in Box – Clodgy is also available in 20 Litre Bag in box. It is exactly the same cider as the bottled version but put into bags rather than bottles. It has been pasteurized to ensure no fermentation will occur in the bag. 6.5% abv / 20l 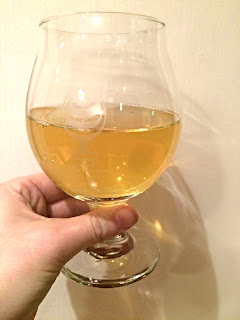 I kept turning the name of the cider into what I expected it to look like in the glass all the while it waited in my cellar. But it doesn't look Clodgy, it simply looks hazy in a way that my phone doesn't fully capture. I could tell that this cider is absolutely still just by looking at it. The color is a bit warmer than many cider  colors but on the lighter more golden/apricot side for a UK cider.

The Clodgy smells far more outside of the ordinary than it looks!  The first and most prominent note is lemon, followed by cotton fluff. Secondarily I smell some acedification (which to me smells like a fruit vinegar) and some overripe pears, followed faintly by olive, and something that reminds me of a fruity shampoo. Such an interesting carnival of aromas! I have a feeling that is is going to bring the funk!

The bottle and website both refer to using back sweeting with fresh juice to bring this cider into medium territory in terms of sweetness. In the US we use semi-dry and and semi-sweet to describe that medium range, but the Clodgy tastes just  barely off dry. This is the rare cider that tastes more dry than the promotional language led me to expect.

The Clodgy cider tastes so actively basic and not acidic that its almost shocking to my palate. Wow, this is really different. Though the cider is almost 100% still, I do get a tiny burst of effervescence when it hits my tongue. The tannins do not make as big as an impression as I rather expected; they remain in medium levels.

In terms of flavor notes, this cider offers up a huge range of them raw green apple, salty, hints of underripe banana and blueberries. The overall impression gives a sprawling sensation; this is a big cider rather than an intense one. There are also background notes of metal and soap. That underripe banana is puckering and reminds me how much this cider is not American.  All of these differences are almost certainly a result of totally different apples, rather than a substantially different fermentation process, especially as the website describes back-sweetened with unfermented apple juice. That's fairly common here.

On a whim, seeing that it was still, my husband and I heated a glass of the Clodgy up. Lo and behold, this totally worked! The medium-ness of dry notes really comes out in a pleasant stony way.

I had mine with an Oscar nominated film and some really fabulous chocolate cookies (thanks to my Sister-in-Law) but that's not necessarily how I would recommend the cider now that I've tasted it a bit. Perhaps have this with a savory bread pudding and some cheese.
Posted by Meredith at 4:42 AM