I'm not a gifted chef, but from time to time I get together with a good friend and we make a nice dinner together specifically to try out a fun cider pairing. I did this with my friend Phil (He's a great cook and the talented individual who runs Eruditorum Press: http://www.eruditorumpress.com/blog/author/phil/) a few weeks ago. We chose a loose concept of Asian barbecue to pair with a cider by Blake's Hard Cider Company. 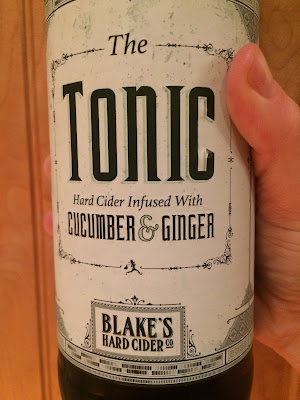 You can find out all about Blake's on their website: http://www.blakeshardcider.com/

If you visit the site, you'll see that they do a tremendous number of interesting seasonal and limited release ciders. Trouble is, I cannot buy Blake's ciders within a hundred miles of where I live. Grrr! They're out of Michigan, which has a quite strong cider scene.

I've gotten a few from the company, and this was part of a trade with Darlene Hayes (who quite literally wrote the book on cider cocktails: https://www.amazon.com/Cider-Cocktails-Another-Bite-Apple/dp/0996321500/ref=tmm_pap_swatch_0?_encoding=UTF8&qid=1490665129&sr=8-1

My first review of anything by Blake's Hard Cider Company is their El Chavo from late 2015. http://alongcameacider.blogspot.com/2015/11/cider-review-blakes-hard-cider-companys.htmlThat cider is a fruit and spice blend that uses peppers and mango to create taste fireworks. I know it sounds weird and, to some cider purists, blasphemous, but it tastes fantastic. And that's always going to be the arbiter for me. Does this cider taste good? Do I enjoy drinking it?But for this dinner, we were excited to try  The Tonic by Blake's Hard Cider CompanyThe official description reads, "As the first flushes of green awaken the new year, invigorate your senses with freshly picked ginger root and cool cucumber combined together to create our crisp, light elixir; Blake's Tonic." 6.5% ABV. 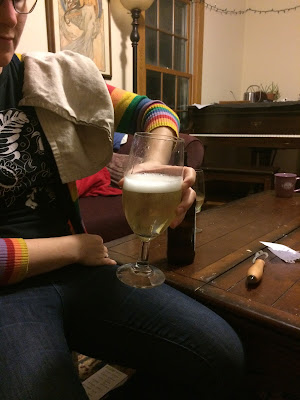 The first thing that we noticed was how verrrry bubbly it was. This photo is crazy and uncomposed because the bottle was going a bit crazy after we opened it and I wanted a quite photo that actually shows a cider with a half inch of foam. It poured with even more at first. Cider is brilliant and the color is that gentle shade of yellow that seedlings have before they turn green. You could also call it flax.

The Tonic smells sweeter than it tastes. The most striking aroma is actually like sugared cakes. I can also smell cucumber and apple.

This is a semi-dry cider, but that's hardly the most interesting element about it. The flavors on the other hand...

This cider comes across as completely cool and summery. I get some ginger in flavor but not in aroma. The comparisons to a gin and tonic are obvious but apt. It's not super gingery, but just enough. The more sips I took, the more I could taste the ginger. Its far more cucumber and cool balanced cider than anything else. Lots of ciders call themselves crisp, but this one actually is.

The mouthfeel is fizzy but perhaps not quite so much as the crazy mousse had prepared me for. I found it light and lively, its decidedly sessionable, at least for those lucky enough to have more than one bottle on hand. It sounds very daring, but this combination really worked for me. Rather like the El Chavo, it sounds crazier than it tastes. 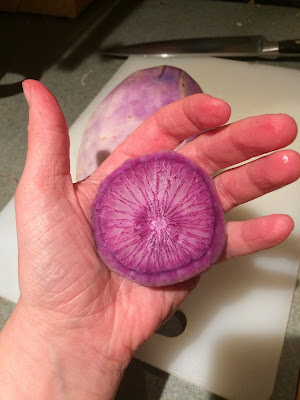 We paired this with a really fun Asian inspired BBQ menu to do a little mental trip to summer. I made a Napa cabbage slaw with spicy peanut sauce and soy-miso-glazed Mu turnips (pictured). For the meat eaters present there were 5 Spice Barbeque Chicken Legs. And the veg folk had the same sauce on oven baked tofu. Delicious and so sticky! Blake's tonic worked perfectly though because the cucumber was so cooling and the ginger connected the flavor to our sauces, all of which incorporated elements of Asian cuisines.

Usually my pairs are simpler than that because most of my cooking is more based on ingredients than sauces, but this was a total blast. I had so much fun thinking about a flavored cider and flavored vegetables in new ways. You don't have to go as elaborate to pair this though. I still think the picnic or BBQ route is perfect, or really anything spicy. Enjoy how cooling these flavors taste. 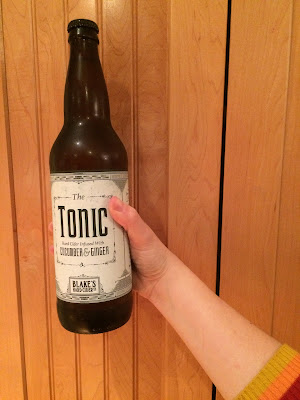 Now, I'd like to close with a brief moment of geekery and share some really exciting cider education opportunities for current USACM members (apologies for those who aren't members). At CiderCon, there were two presentations making great use of cider sales data as gathered by Nielsen (yes, that Nielsen). I attended and got a lot out of them, particularly as I feel like my perspective is doubly skewed by living in cider country that is also wine country.

All USACM members are invited to two upcoming Webinars about Nielsen data. I know some few stats have trickled out to the news, which has unfortunately pounced on a couple of misleading numbers that make it sound like the cider market is shrinking. These webinars go so much deeper to show a rich picture of what's happening with cider sales in a variety of locations and market segments.