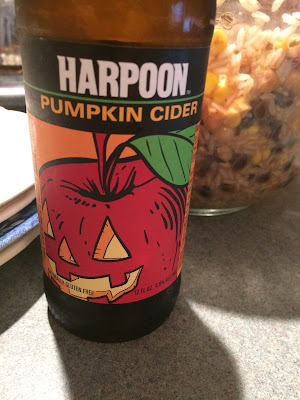 Pumpkin has become a divisive topic. I can only blame its popularity for the pumpkin backlash. Anything beloved enough to be a craze is going to make some haters. And for cider purists, the idea of a pumpkin cider is blasphemy. But I refuse to participate. I like pumpkin and I love cider, so I try new pumpkin ciders every year. Some formulas work beautifully. Others don't.

Today, I'm sharing my thoughts on Harpoon Pumpkin Cider. This is my first review of a cider by Boston-based Harpoon Brewery. They've made cider since 2007 and beer since opening 1986. They are primarily a brewery, but I can see five different ciders on the website, though I've only seen two available for sale in my travels. (Full disclosure, I did receive this review sample from Harpoon.)

Read about their ciders and beers at the website: https://www.harpoonbrewery.com

Or, take a peek at this compilation of cat pictures that feature Harpoon Beers (and one of this cider!)
https://www.harpoonbrewery.com/blog/16-cats-who-are-loving-beer-and-loving-life-341

Official Description:
Reading elsewhere on the website, I learned that some selective mixing of their Winter Warmer beer and their signature cider inspired making this spiced cider. It has a very low alcohol content with an ABV of 4.8%. That's really not typical. 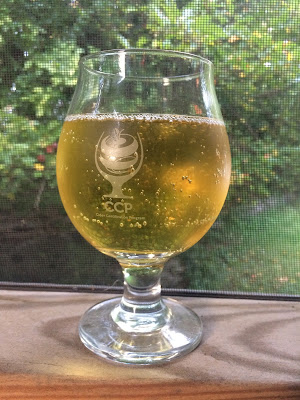 There's no mistaking this cider for beer as its poured! It doesn't form a head and instead just shows off a few clinging bubbles in a gentle barely hazy sea of saffron liquid.

The smells of this cider aren't super potent, but what's there is yeasty, spicy, clean, and appley. All of these relatively low intensity aromas are pleasing and subtle. Reading about their ciders, My perception of a beer yeast is borne out. They use a proprietary ale yeast in all of the ciders.

This is a straightforward semi-dry, but if folks are not used to to flavors brought by a less fruit beer yeast, this might taste a bit less sweet (even if not exactly drier).

The spice blend makes up a significant part of the cider's flavor; it favors nutmeg, but includes enough cinnamon, ginger, and clove to really bring out that mulled cider, pumpkin pie, autumn feeling that any pumpkin item promises. Here's what I love about it though. This cider is really pleasantly balanced. That doesn't sound like a giant high point, but trust me it is. The beer yeast is the absolute perfect way to counter the sharpness of baking spices. We get all the notes, apple, spice, bread, and pumpkin.

This is an exceptional cider both for the format and for style. Its light bodied with medium acid and no tannins. This cider is the classic autumnal flavor experience that so many things promise. 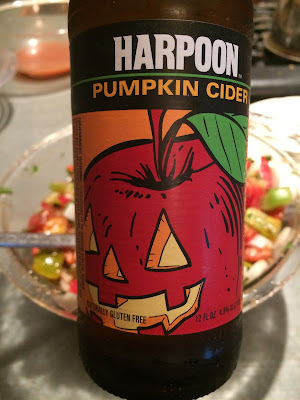 I enjoyed mine with fresh homemade salsa, black bean and corn salad, tortilla chips and the two-part finale of Twin Peaks The Return. The show may not have offered answers(to do so would have betrayed the show entirely), but the cider and snacks certainly did.
Posted by Meredith at 7:36 AM