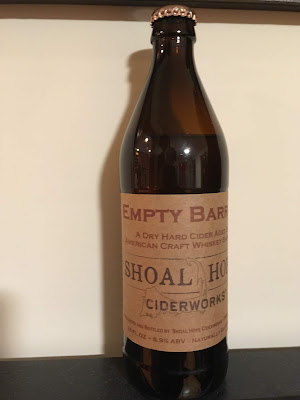 Though we’re almost there, I feel a bit apprehensive about claiming that we’re surviving January. Perhaps that’s just the incoming snowstorm and Polar Vortex that have me waiting another week before claiming victory over this dark, cold month. I’m not saying January is all bad; it’s not. It’s just challenging if you enjoy light, comfort, or warmth. What I have enjoyed this month is cooking at home and pairing some great meals with some fantastic ciders.

Let’s begin with a very seasonal cider from Shoal hopes Ciderworks. I was lucky enough to receive a sample of Empty Barrel for review last year. This Massachusetts cidery has a few different ciders, and I’m slowly trying them and sharing the results.

I had the Cranberry Cider from this cidery last October:
http://alongcameacider.blogspot.com/2018/10/cider-review-portland-cider-co-pumpkin.html 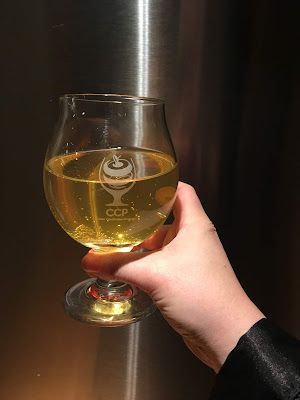 This cider looks barrel aged. There’s something about that process that leaves many ciders a bit hazy, and the Empty Barrel is no exception here. I’ll call the color warm straw. It doesn’t show many bubbles, so I’m not sure how sparkling to expect this cider will be.

This cider has so many aromas. I got so many notes just as soon as I lowered my face to the glass. I could smell overripe apples, oats, caramel and then something more brusque and bracing like petroleum. The cider smells fruity, salty, sweaty, and above all barrely. I know I can expect both apples and barrel to come forward in this cider’s flavors. 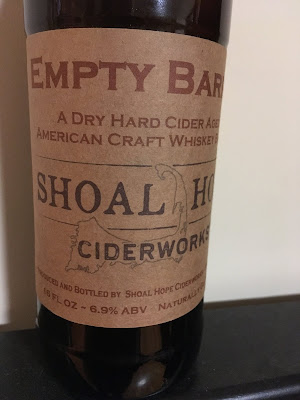 While I am not confident in calling this cider completely dry, neither is it sem-dry. Instead, it comes across as off dry with lots of savory notes.

This is a cider for fans of the barrel. Yes, there’s apple but more so I can taste barrelly tannins and plenty of minerals. This is stony like wet gravel with medium acidity. There’s some briny notes as well.

Thin mouthfeel has low to medium bubble intensity and some real lightness. One of my favorite things about the Empty Barrel is the nice gentle warmth on the finish that comes after a bracing first taste. There’s not a ton of fruit, everything that’s stony and mineral or woody and savory are more prominent. I had this cider with loaded macaroni and cheese and some intense Bananagrams (I keep losing, but it's getting closer). It also goes well with Johnny Cash and Deadwood. 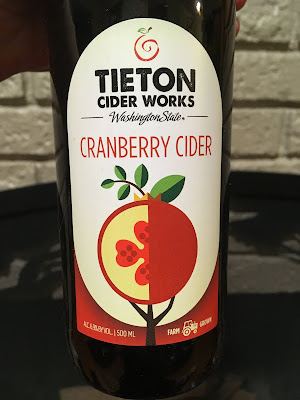 My second cider for this week is one from Tieton Cider Works that had been waiting in my fridge for entirely too long. I’m afraid that’s becoming a theme. I don’t get a lot of Western ciders, so I buy them where I can. That means that it’s sometimes a wee minute between finding the cider and getting to open it.

Most recently, I tried the sparkling Perry as part of 2018’s Very Perry May: http://alongcameacider.blogspot.com/2018/05/very-perry-may-tieton-cider-works.html
This made my top 10 Ciders of 2018!

I tried the smoked pumpkin in 2015: http://alongcameacider.blogspot.com/2015/10/cider-review-tieton-ciderworks-smoked.html

The Spice Route was a lovely and unusual blend of mulling or baking spices:
http://alongcameacider.blogspot.com/2016/11/cider-review-tieton-ciderworks-spice.html

My first Tieton review, of their Yakima Hopped, has more of a company intro:
http://alongcameacider.blogspot.com/2015/07/cider-review-tieton-ciderworks-yakima.html

You can visit the website to learn more about the company: http://tietonciderworks.com

The Cranberry is one of Tieton’s Core ciders.

Here’s the official description: “Racy and fresh, this cider is perfect for lovers of both sweet and tart. We blend fresh pressed cranberry juice into an already upbeat blend of fermented apples. Bold and bright on the palate with all the freshness of ripe, red, summer fruits.” 6.9% ABV 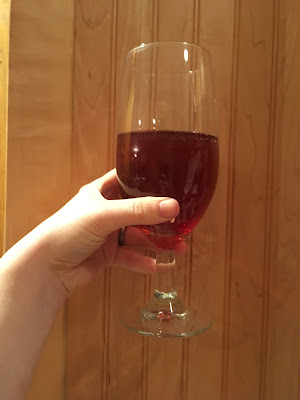 I love it when ciders give me an excuse to look up shade names for a color. This looks the most like maroon of any shades of red I could compare it to. It poured brilliant without much bubble action. It is a very appealing cider to look at.

This cider smells directly and immediately like cranberry juice. The notes are all red fruit with just a little white sugar in the background My tasting companion found the aromas wine like. There’s some apple aroma action, but it’s subtle.

This is a juicy sweet cider! It doesn’t pretend to be anything else.
Flavors and drinking experience: cranberry, high acidity, cinnamon, apple, cherry

This cider tastes as cranberry as it smells! And since I’m a cranberry fiend, this totally works for me. There’s more going on though. The Cranberry cider offers up high acidity but not a lot of salivary reaction. I get some apple, just a little apple on the finish but not a lot. I taste almost as much of the suggestion of cinnamon as I do apple, and there’s no actual cinnamon in the cider. The cinnamon note happens sometimes in cranberry ciders and even more often in cherry ciders. Most of the notes I taste are all fruit but there are suggestions of dust and wheat at the start of a sip.

In terms of texture, I noticed a relatively relaxed low-intensity bubble, but it’s too much to call the cider petillant. This cider is pleasingly accessible to anyone who loves cranberry, but if that’s not a fruit you love—maybe this cider would be a little too cranberry.

I think my favorite part of drinking the Cranberry Cider is that little kick of bitterness on the back of the tongue.  Clean fermentation—would maybe like a bit more flavor of that.  This cider is unambiguous and yummy.  The apple smoothes out the astringence of cranberries a bit, but crucially. It tastes like the fermented version of the cran-apple juice I drank in high school with my best friend in AP English.

I had this on a quiet night in with a super healthy black bean and veggie bowl. The cider made the meal because with so much healthiness, I craved something just a little sweet and indulgent. The Cranberry cider fit the bill perfectly.