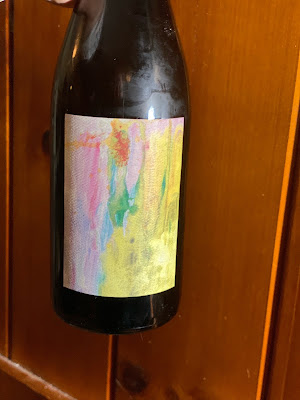 Hello! I’m not Meredith! Instead, I’m Elizabeth! Meredith was unable to clear time for all you lovely cider fans, and so asked me if I’d be willing to fill in for her, and of course I said yes. So hi. I’m a writer living a mile or two up the hill from Meredith in Ithaca. You can mostly find my work at http://www.eruditorumpress.com, where I write about things that are very different from cider.

I’ve known Meredith since college, and was on the trip to England with her where she first fell in love with cider. You’ve seen me lurking around the edges of this blog, providing a few tasting notes here and there, and occasionally becoming the subject and occasion, such as when Meredith provided cider pairings for two of my elaborate birthday dinners: http://alongcameacider.blogspot.com/2018/09/my-dear-friend-el-just-had-birthday.html and http://alongcameacider.blogspot.com/2017/09/finger-lakes-cider-week-and-birthday.html

As those posts suggest, I’m a big lover of all things culinary. In my cooking, I strongly favor local and seasonal ingredients, and when it comes to cider my tastes are similar: I love the myriad of Finger Lakes cideries, and am members of several cider clubs in the region. It was through one of those that I got today’s cider, Butcher Hollow, from Eve’s Cidery, which Meredith has featured on the blog so many times before that I’ll just link her tag for it: http://alongcameacider.blogspot.com/search/label/Eve%27s%20Cidery

They’ve got a ton of information at their website at https://www.evescidery.com , including information on the cider club where I got this bottle.

The gorgeous label is described as “an abstract representation of the aura of the cider.” But it’s the back label that is truly striking, with the following simple and unsparing description of the cider:

“The apples for this cider were gathered on a single day in a single location of the Finger lakes National Forest, traditional lands of the Onödowága: where they tend productive, abundant orchards until the trees were destroyed in General Sullivan’s campaign of genocide in 1779. When the Indian orchards regrew from the roots, White Settlers made cider from them. This fraught and complicated history can still be read in the landscape today, through the story of wild apples.”

This stunningly direct account of indigenous genocide puts what initially seemed like a pretty standard bit of rural place naming in a cold new light. Thankfully, Eve’s Cidery is at the forefront of efforts to acknowledge this history and do what can be done to right these horrors through its involvement, along with Redbyrd Cidery, in newcomer Open Spaces Cidery’s biennial Reparations Packages, which offer a trio of limited and exclusive ciders to people who make an appropriate donation to organizations involved in providing farmland to BIPOC communities. You can find more information on that at https://www.openspacescider.com, and, not to offer any spoilers, but I’ve definitely got a really interesting bottle from Open Spaces that came out of the last reparations package stashed away to bring to Meredith’s house soon, and I’m sure you’ll be hearing more about it.

The zine Eve’s sends out with its club shipments (and I cannot tell you how much that phrase delight me) gives a further sense of where these apples came from, describing a wagon wheel that had been placed around a tree, long since rotted away, leaving only a metal ring around the trunk. What a beautiful place, where such horrible things happened

The zine also gives more details of how the cider was made: it’s a wild ferment, with a secondary fermentation in the bottle, which was aged on the lees for nine months and disgorged. 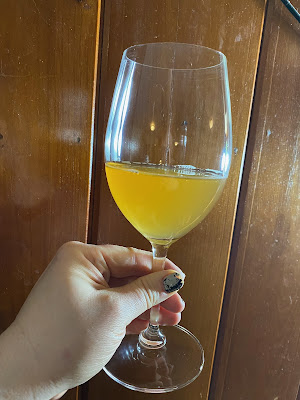 A cloudy cider, pale yellow with tones of warm gold that dominate once I took it away from the bright light I was photographing it with.

Our first impressions of the cider left us all convinced we were going to be terrible at this job as we all agreed that it was, well, appley. Eventually we managed to find our way towards notes like candied lemon, apricot, and some faint spice notes of nutmeg and cinnamon, but man, we sure appreciated how good Meredith is at this by the end of this section!

Sweetness/dryness: Dry, but, as Facebook would put it, “it’s complicated.”

This is a dry cider—the zine says “totally dry.” But it presents with almost a ghost of sweetness—flavor notes that you’d associate with sweetness but none of the actual sense of sugar. A little caramel early on, and some peach notes after the cider had a chance to open up a bit. I drank this while cooking a spicy chili, and the sips I had after spending a bunch of time tasting and adjusting it really brought that quasi-sweetness out.

A profoundly sharp, acidic cider, but with tremendous depth behind that. Clean and rich, but approachable. Eve’s recommends this as a cider for pairing with “roasted squash stuffed with walnuts, apples and cranberries,” and that captures its vibe well—a cider that tastes like being ushered into a warm home where a rich, flavorful winter’s dinner is waiting for you.

The emphatic acidity fades into softer, fruitier notes—pineapple and unripe plum soon after opening it, relaxing into peach and raspberry once it’s sat for a bit. The finish is honeyed and languid. The bubbles are small and soft, enough to add some zip to the mouthfeel but not enough to dominate the experience.

This is a lovely, mature cider, comfortable and welcoming, and everything I want from the Finger Lakes It’s a perfect one to open with some friends on a quiet evening away from the cold, and left me thinking fondly of the next time I’ll get to sit on Meredith’s couch providing a few tasting notes instead of doing this whole thing myself.