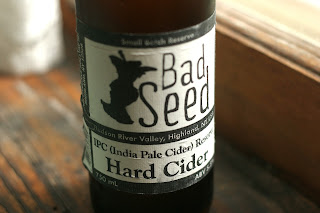 Before leaving New York City, I stopped at the Union Square Greenmarket regularly. It is a great place to pick up some New York State ciders that are a bit off the beaten path. If you ever want to check out their times, vendors, etc. the website has all that info: http://www.grownyc.org/greenmarket-site/manhattan/union-square-greenmarket. On one of my last trips before moving, I picked up four ciders from a quite small new cidery, Bad Seed Ciders. Their offerings seemed adventurous and what I tasted at the stand pleased me. This is the first, but I'll be reviewing all four the ciders I bought.

Bad Seed Cider doesn't have a traditional website. Like more and more companies, they are spending their web time on their Facebook presence. Here's the link to their active Facebook page: http://www.facebook.com/Badseedcider. It has tons of great pics and updates about their availability, but not much info about each of the ciders. I'm not a big fan of cideries not having a consistent place with tasting notes and detailed information about each of their offerings, but I understand that developing and maintaining both a website and a social media presence is tons of work that can feel redundant. Here's what I could find out on their FB page. They were founded in 2011 and are based out of Highland, New York as a development of Wilklow Orchards.

The Bad Seed's cheeky acronym IPC stands for India Pale Cider, not a phrase I've ever seen before. The official description says this about the beverage: "India Pale Cider- Fermented with and American Ale yeast and Dry Hopped with Cascade hops for a bright grapefruit flavor of a fresh IPA" The cider is a small batch reserve with with an ABV of 5.5%. I have shared here a few times how much I love dry hopped ciders, so my hopes are high. 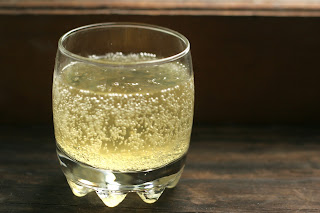 When poured this forms a head briefly, but even after that dissipates lots and lots of bubbles both cling to the glass and to the surface of the liquid. I'm almost alarmed by how bubbly this looks. The color is a creamy beeswax with hints of yellow/green. I think the color looks a bit different than many ciders because of the number of bubbles and because it is hazy rather than brilliant.

Aromas: Not apple, lemon, bran and wheat, hint of herbs

The IPC smells cold in an unexpected way. I smell all kinds of fruits and foods, but not much apple. The citrus smells dominate the nose of this cider.

Again, not very appley. The Cascade hops speak as grapefruit pith and there's a decided backdrop of hay and bitterness. I think by using both beer yeast and hops, this has traveled further into beer territory than most ciders influenced by beer. I love how full the mouthfeel tastes to me.

Drinking Experience: first though is cider for beer people.

Mind you, I second guess that, because the passionate beer afficianados in my life seem to divide binarily about cider. Either they grant its pleasures and validity, in which case they like a number of ciders, or they do not and they list the things they dislike about every cider they try. So I guess it is a cider for cider people who enjoy some beer characteristics. I fall decidedly into this category, so it certainly is a cider for me. It is citrusy, bittery, and extremely carbonated. There is a slightly soapy aftertaste which is odd and perhaps a sign of stressed yeast, but doesn't prevent me from enjoying the cider tremendously.

In terms of pairing, I'd suggest having it with a very flavorful meal. This isn't a light salad or dainty snacks kind of cider. Get a big pizza or make it a burrito night when drinking Bad Seed's IPC. The cider's bitterness would go well with rich foods, including everything cheesey. The flavors are so big and lovely that it really demands some big food as well. I think it could also be a great cider for the last grilling occasions of the summer. Take advantage of the good weather and this very summery cider before fall arrives.
Posted by Meredith at 11:38 AM