Back to my (relatively idiosyncratic) coverage of CiderCON 2015! Today is a very wet coldish St. Patrick's Day, so I am ready to pretend I'm back in company of cider makers and cider lovers. Sláinte mhaith!

The second day of CiderCon began with the Official USACM meeting. My notes come from what stood out to me personally and are far from exhaustive. Apologies for places in which my information is either partial or flawed. As soon as the official minutes/agenda are published online, I'll link to them from here

Just as a bit of background, this is how the USACM describes itself online.


The USACM is an organization of cider and perry producers in the United States. It gathers and shares information about cider production, cider regulations, and cider apple growing, to help members improve their operations, raise awareness, and advance cider in the market. 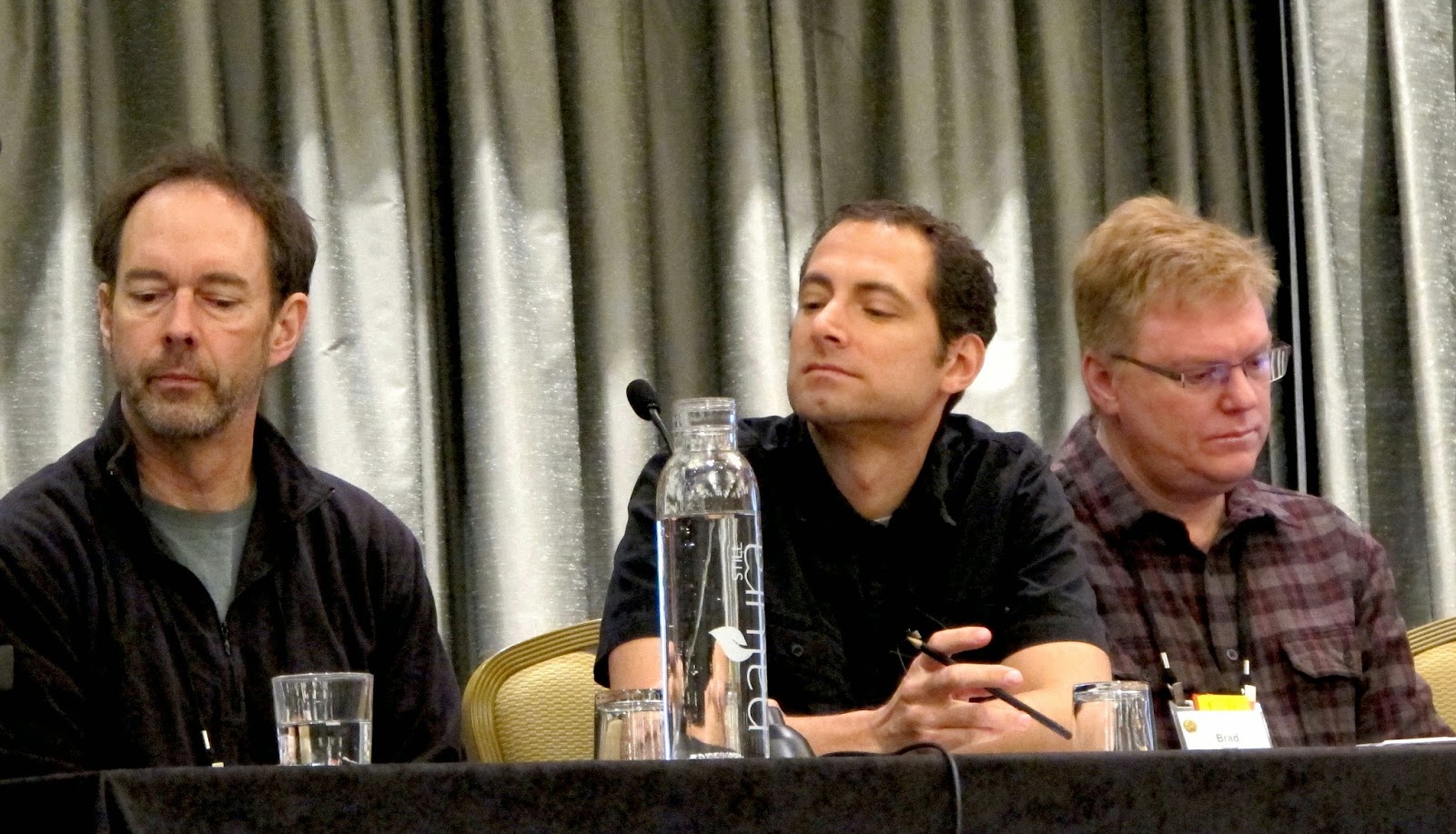 The TTB (Alcohol and Tobacco Tax and Trade Bureau) Representative described an ongoing review of the TTB labeling and advertising regulations that is underway. It has the goal of modernizing and reorganizing labelling regulations. They are hoping to issue a document of planned changes to this effect in 2015. The second step will be for the industry to respond to these proposed changes. We are encouraged to read and interact with the document and come to the TTB with our ideas or concerns.
The TTB representative's final point was to encourage attendees to come and speak with any one of the seven representatives the TTB sent to CiderCon. 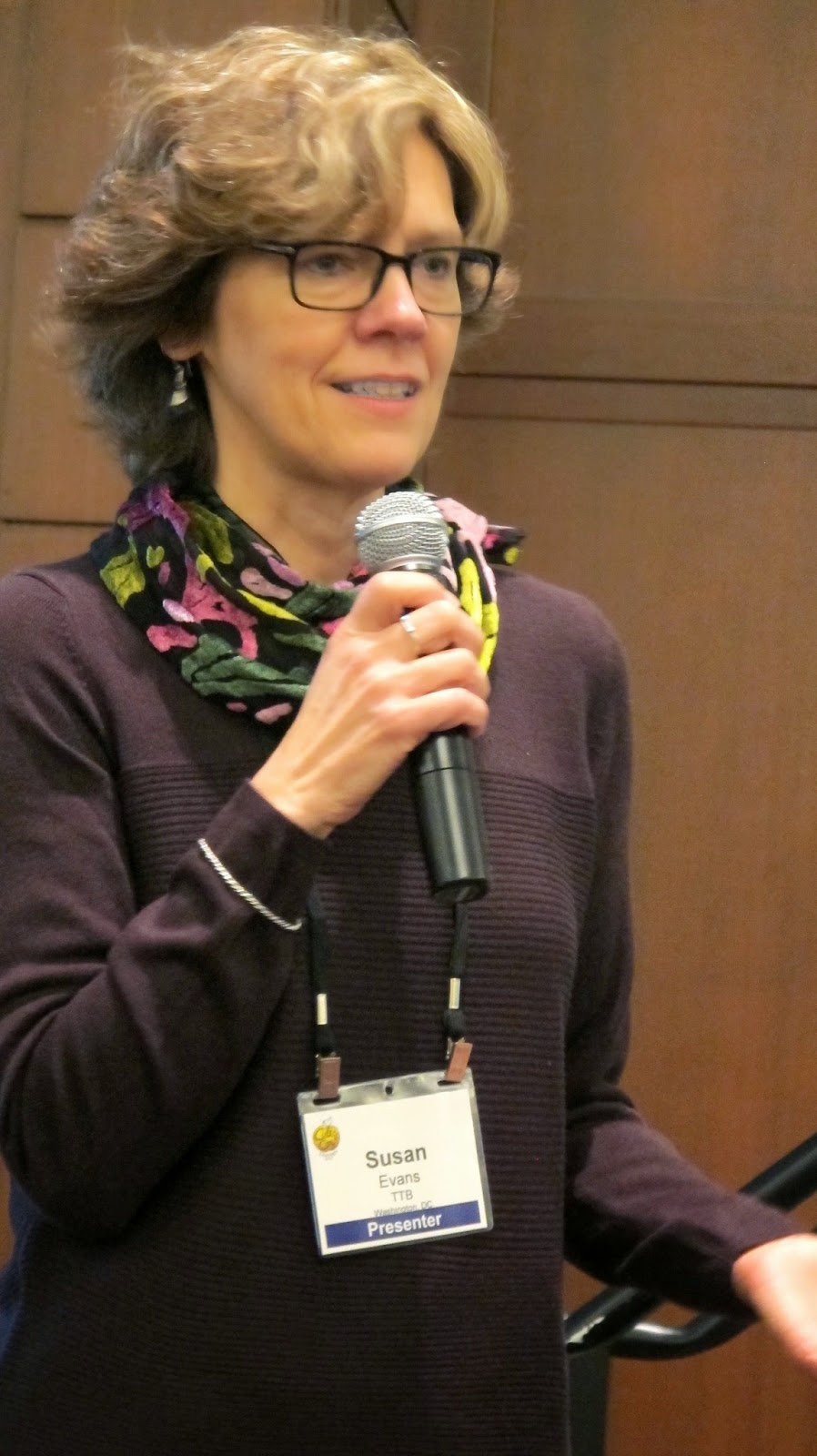 Most interesting to me is that TTB.gov has a new cider FAQ.

(After spending some time with this document it has given me new appreciation for what every commercial cidermaker, winemaker, and perrymaker has survived in order to offer their product. I raise my glass to them.)

The USACM wants to develop a marketing committee but only if that is what the membership wants and it will be very membership driven in terms of goals and activities. Some possible goals include developing statistics on cider in this country and industry.

As part of the Finance Report, I learned that one of USACM's next goals is to have paid staff to deal with the money. Right now two people Sue and Ellen handle lots of USACM administration and James Cohen serves as the conference organizer. In other news, a new website is coming that will hopefully be clear and easy to update. 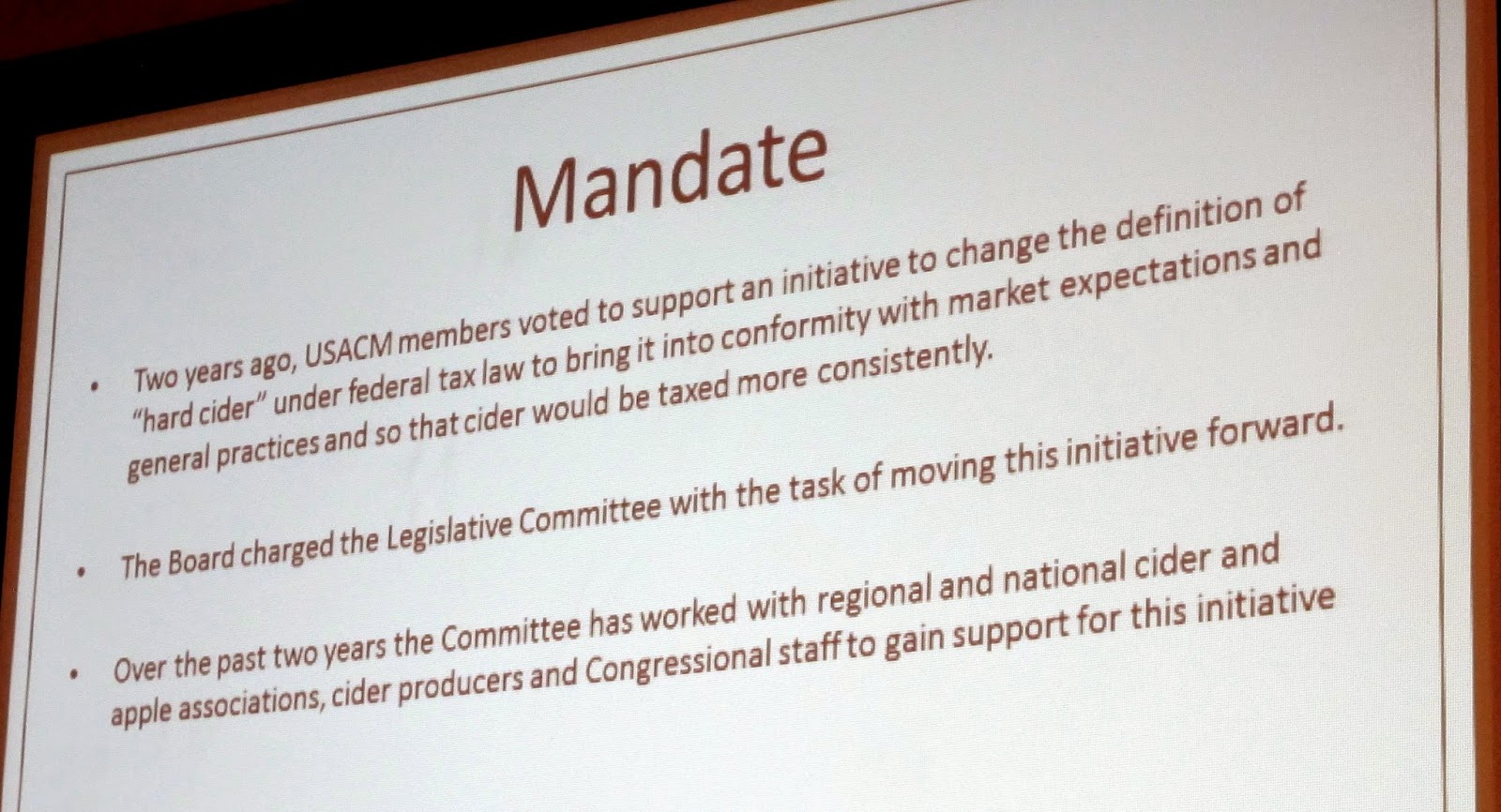 The Legislative Committee gave us their update on the CIDER act (h.r. 600) which is a big big reason that the USACM is important for all US cidermakers. This has to do with how cider is defined, regulated, and taxed. If you like other fruit juices blended in with your cider, if you like higher ABVs than 7%, or if you like intense sparkle to your cider, you like the CIDER act. There are a few dozen other reasons to love it, but I just wanted to describe the tastiest ones first.

Read more about it here: http://www.ciderassociation.org/page-1842966

Next year's cider con is in Portland, Oregon. All of the west-coast lovers cheered at this.

Cider Con 2015 will including the USACM giving its first set of cider awards. This was a surprise to many in the room.

Allusions were made to cider research grants. Dan, Greg and James met to discuss small grants and Ian Merwin formerly of Cornell University and now of Black Diamond Farms/cider is involved. People interested in orcharding, cider apples, and researching any of these or related topics should watch the USACM page for more information on cider research grants or contact those folks.

Then I took a break for a great veggie omelet and home fries during the "Cidermakers seeking Distributors/Wholesalers Networking Lunch." But if anyone who attended that would like to comment about their experiences, I'm all ears and I'm sure I'm not the only one. 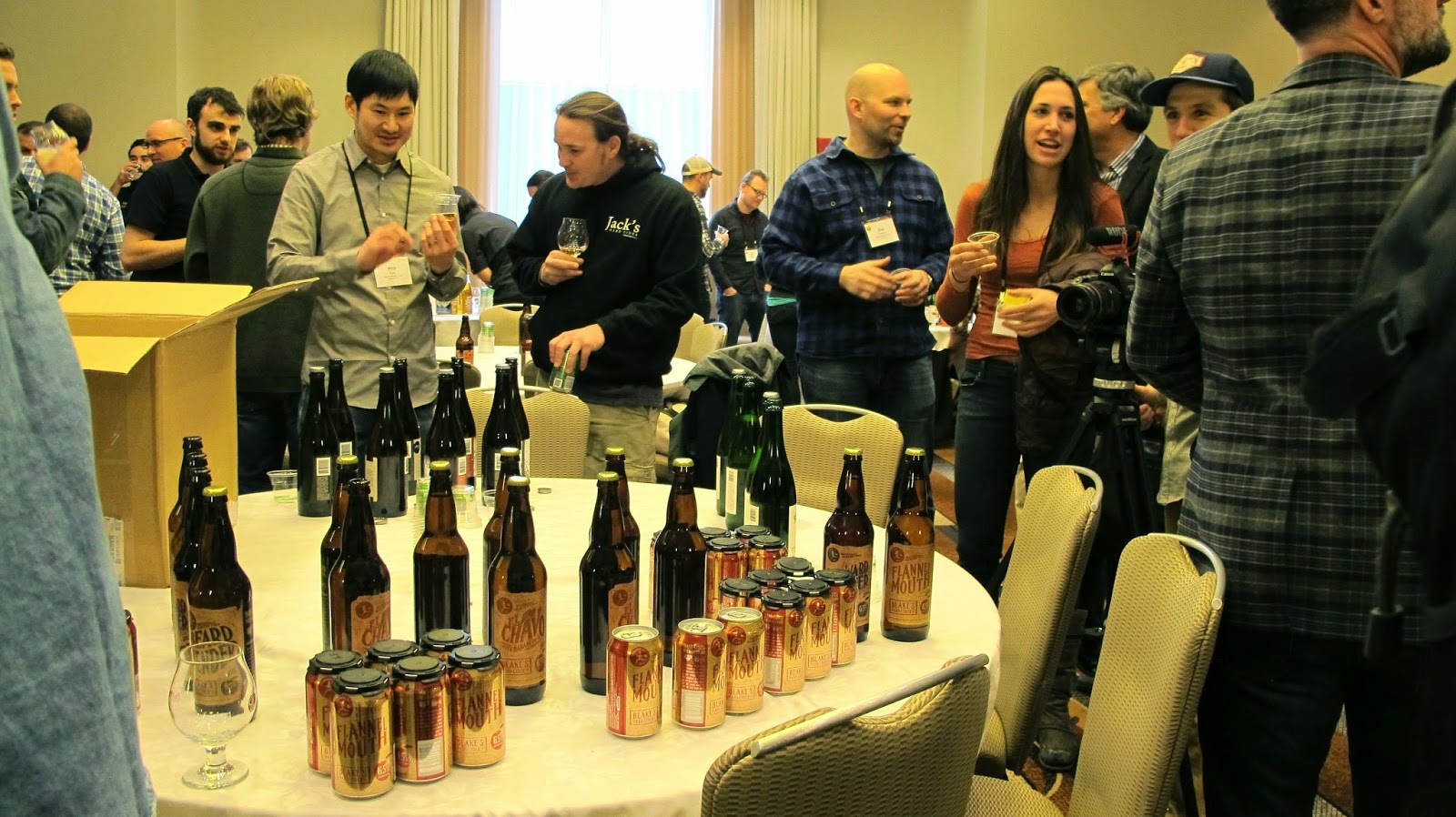 One highlight of Wednesday was the cider share. Dozens and dozens of cidermakers from all over the place presented their bottles of cider. It felt like every table in the ballroom was filled and in some cases being shared by up to three different cideries. Folks circulated slowly, sipping here and discussing there. No one could try all of the ciders in that room because not only were more cideries represented than I’ve perhaps ever seen in one place, most companies brought between two and five different ciders (and fair number of perries made an appearance as well).

I attempted to moderate my tasting because these rapid-fire tastings never give me enough information (or a clean-enough palate) to create a full review. But I did get to speak with a number of really interesting people while making note of the particular ciders I wanted to taste again and review. Many folks were really generous in not only giving me information but also either giving me ciders to fly home or offering me packages of cider in the near future. So, in other words, it was heaven. Cider flowing. Great conversation. And promises of more cider to enjoy quietly and thoughtfully in the future.

And those cider packages have started to arrive! I cannot wait to really review and enjoy ciders from: Seattle Cider Company, Rev. Nat's Hard Cider, Cider Riot, and others. I'm still looking forward to a few more arrivals, including one made of Wickson Crab Apples. *hint hint*

There was an FDA session. A generalized Powerpoint presention was given by Lynn Szybist about labeling. Because it was so broad and general the bulk of the session came from questions asked by many cidermakers. There are some vast arenas of confusion when it comes to what is allowed and what is required by either the FDA or the TTB. I’ll simply say that people communicated their frustration through asking detailed and specific questions. Unfortunately, answers were few and vague. I’ll leave it at that. 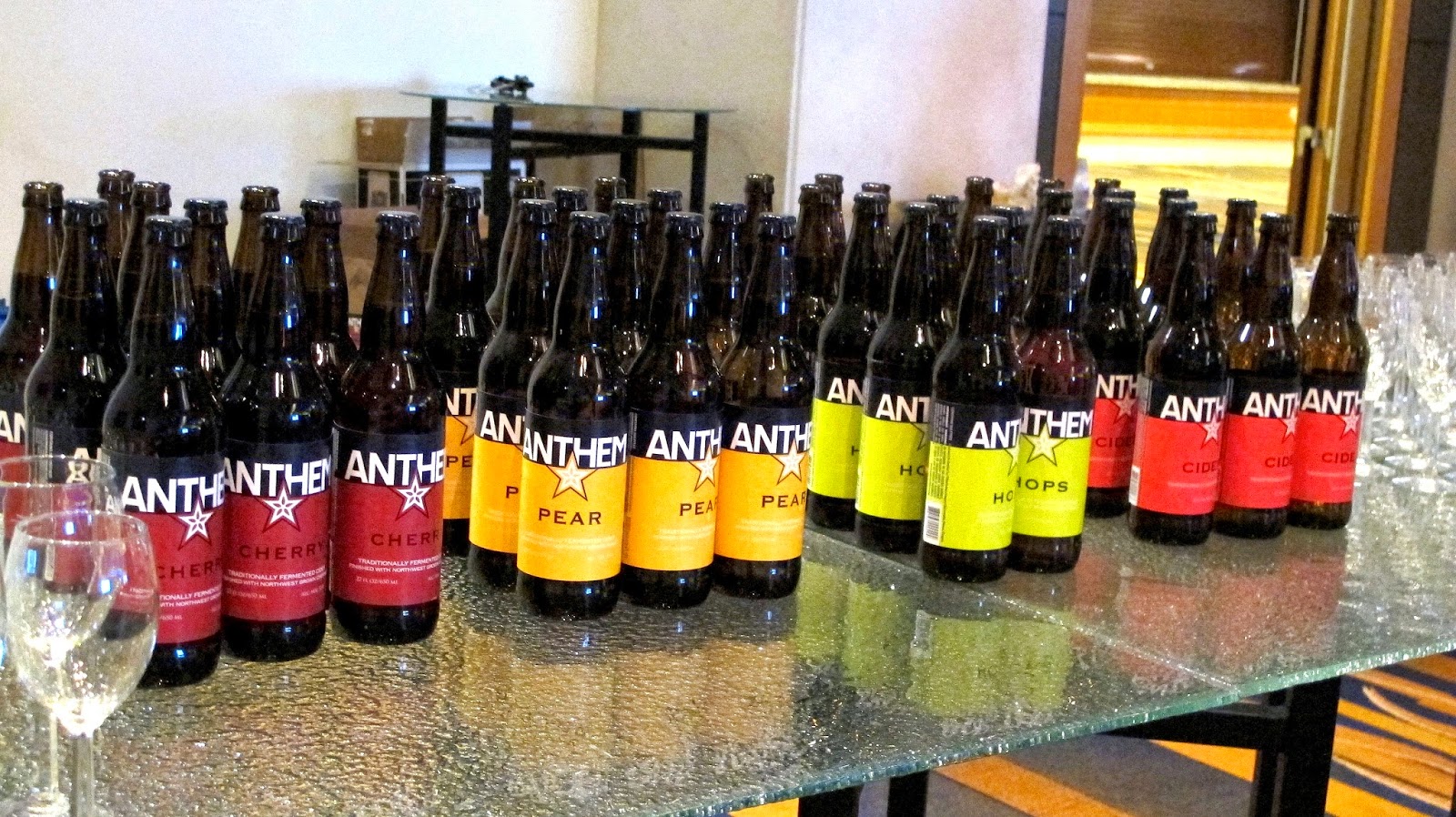 Our day officially ended with a welcome reception. By which point, I felt almost more ready to be welcomed to dreamland than to be given more delicious cider and food. But, CiderCon is not for the faint of heart or stomach (or liver). It was a very educational and enjoyable day, and we were only getting started.
Posted by Meredith at 11:32 AM