So much for March going out like a lamb. It's snowing again! I've become convinced that I'll be reviewing winter friendly ciders for another month. But for today, we're headed back to my coverage of Cider Con 2015! 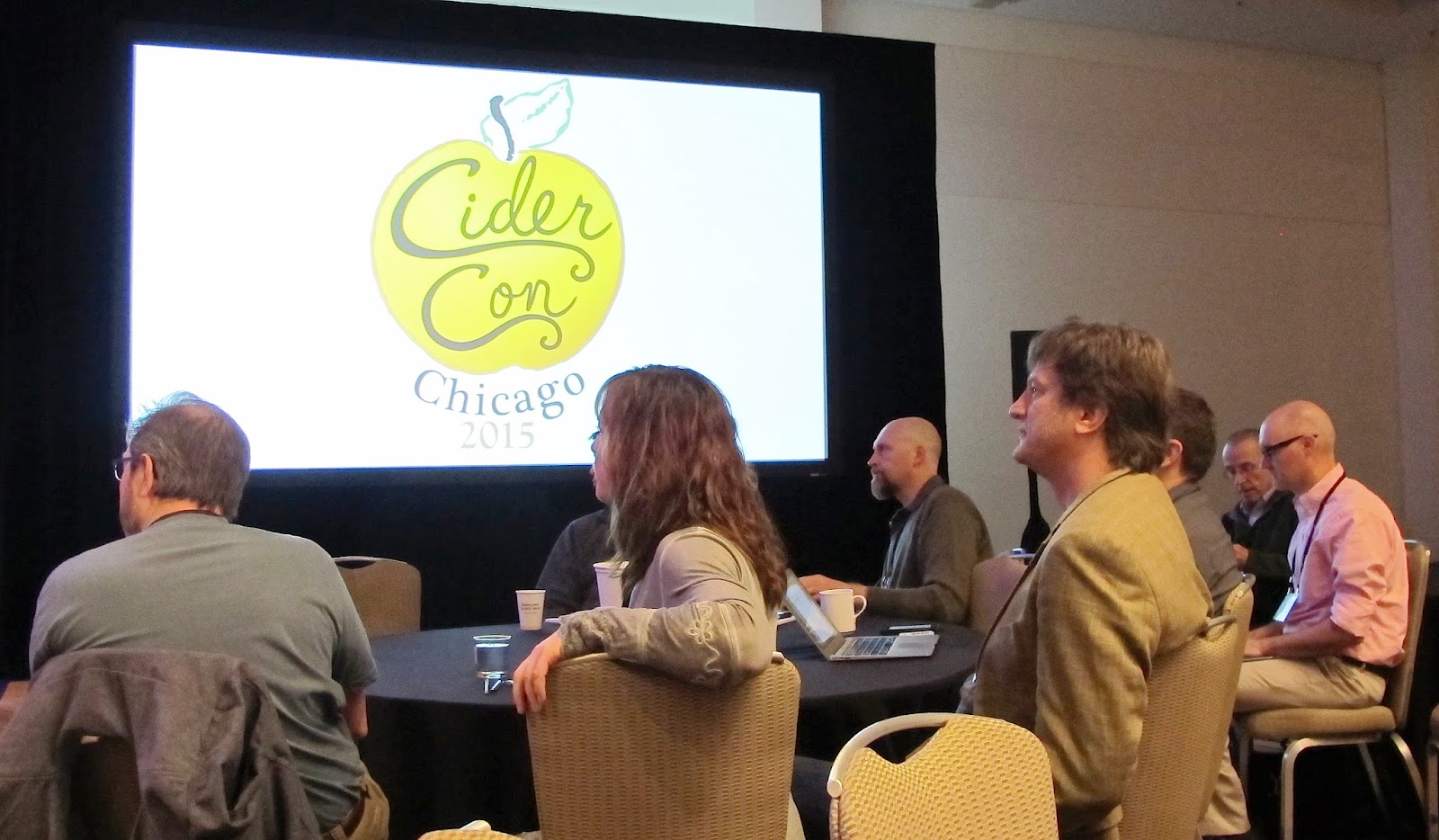 Thursday morning, I wandered in to a huuuuuuuuge packed room where most folks had picked up what looked like a remote control on their way to round tables. These devices are clickers, and this session was designed to give us real time info from other cideries about many current issues in the field. Wow. Interesting stuff and a good way to start the day.

Here are a few of the assorted results of the clicker survey:

Most cidermakers buy at least some of their fruit, but most buy it locally. That fact may not sound like much on first read through, but here’s why it matters. There are tons of cideries starting up. Some are brewers, winemakers, home cider makers whose primary passion is for the fermentation of  juices into cider. There are also some orchardists or inheritors of family orchards who see cider (and its massive growth in the past few years) as a way to preserve and enrich their apple growing business. What this fact says to me is that these folks don’t need to all go into business independently and either scrounge for the ability to buy enough good local fruit or to struggle with reinventing the wheel of good fermentation practice, but should probably find each other instead. But that’s just my take from sitting in that room and seeing who was there at CiderCon.

Greg Peck and Carol Miles of University of Virginia ran the session.

After the clicker session, we had two keynote speakers from large successful cider companies, Robert Vail of Angry Orchard and Martin Thatcher of Thatcher’s Cider. I didn’t know quite what to expect, because the attitude within the cider community is not always one of approval of the larger companies. But CiderCon does seem to be a place of coming together for cider as a beverage and a shared love.

Robert Vail began his presentation with a video, an affectionate cider-themed spoof of Field of Dreams; the point of the video being that “If we build it, they will come!” The video was charming and funny, and starting on that foot struck me as extremely intelligent. We had already laughed together before Vail even began speaking.

After the disarming video, Vail offered some fascinating and encouraging information. The rate of cider’s growth in America is fantastic and has been fantastic for a few years now. If we were to consider cider as a beer style (which is not how I think of cider personally, but I’m sharing what Vail presented) style, it would be second only to IPAs in the United States. That’s huge.

This picture is a map of cider's growth as a category in different regions of the United States. 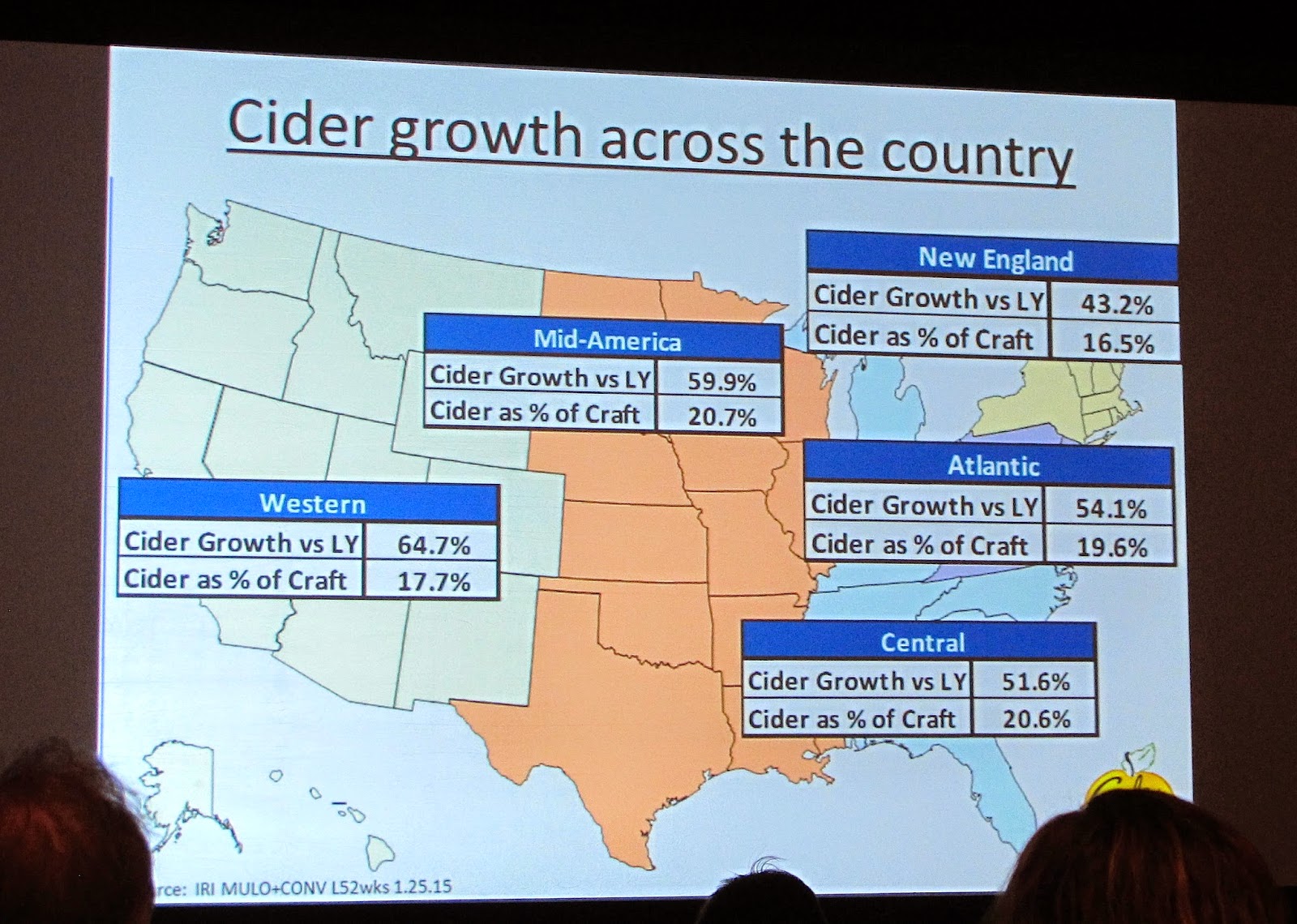 Vail also talked about the coherent brand message of cider, its heritage, authenticity, and its basis in fruit. He described getting cider’s display in off-premise accounts like grocery stores, beer stores, and wine stores to be further away from fermented malt beverages (the Mike’s Hard Lemonades etc. and those scary beer-fruit-margarita hybrids) and closer to the craft beers. He spoke of this as a way to communicate to consumers and to raise both the perception and the price point of cider. This is important because cider truly does cost more to make than all of the malt beverages and even more than many craft beers. Many folk need this because they are struggling to function as small businesses at the prices that ciders can draw in many settings.

His big takeaway message is that this growth for cider is not yet over and that both craft cider producers and larger companies need to think of the category first and their own brand second. I love that idea. I agree with it. I think that is the best way to grow cider and serve everyone in the long run. But, I do want to acknowledge that I don’t have all of my life savings staked on a cider company, so I have room to feel that way and say that some folks might not. Your mileage my vary and all of that.

Then Martin Thatcher spoke about his experiences and about Thatcher’s Cider. (For those who don't know, Martin Thatcher is the UK National Association of Cider Makers Chair as well as a fourth generation cider maker.) If you want to see the website for Thatcher's, it's here: www.thatcherscider.co.uk

He spoke about the cider market in England over time and my first real take away from that was, “The race to the bottom can really damage a brand and an industry.” He was referring to the drive to make cider cheaper as a method of competition within the cider category in previous decades. The UK cider market has seen periods of growth and decline partially due to severe fluctuation in both cider quality and the public perception of cider. 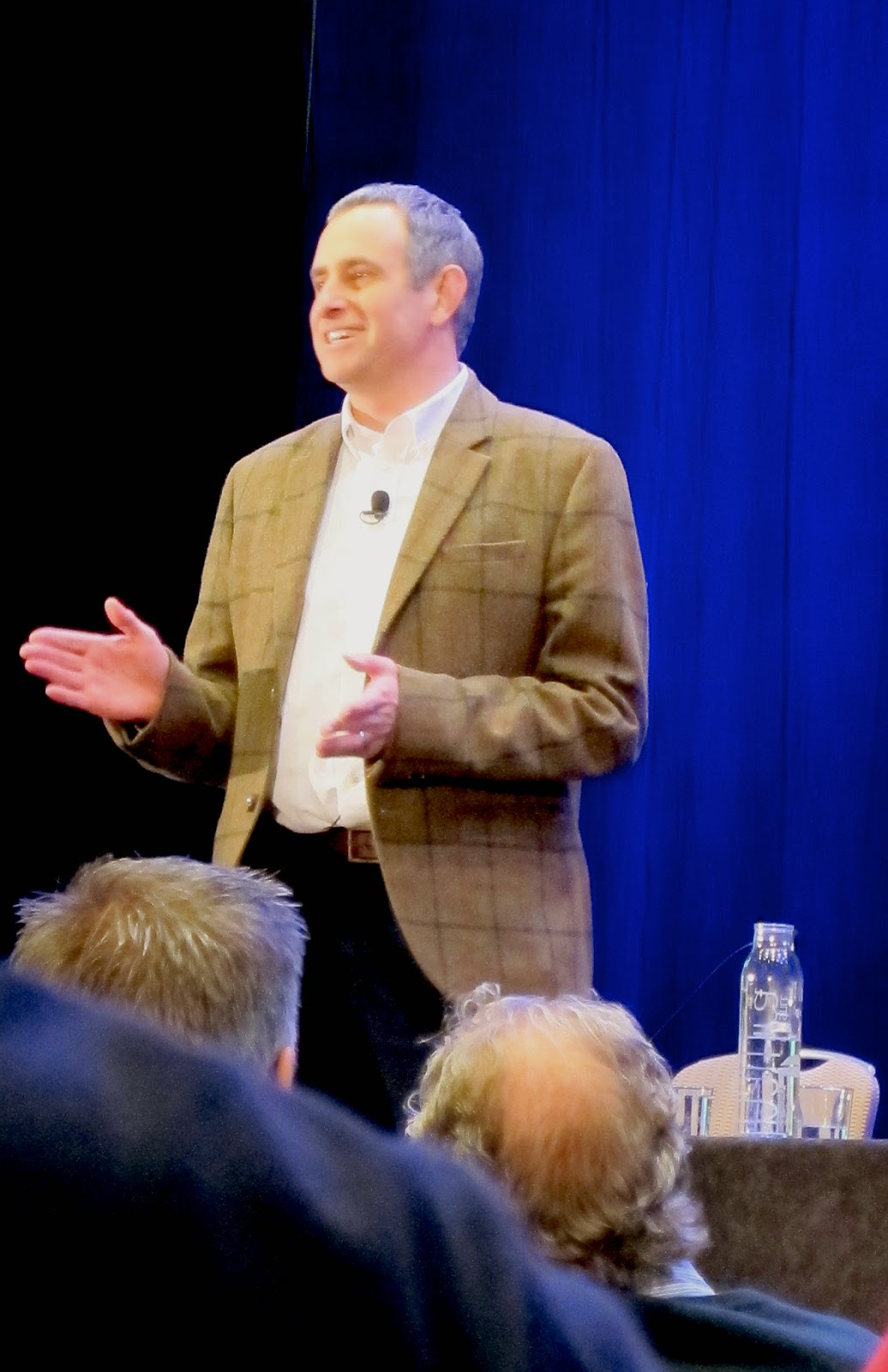 He described branding as a window to a company’s values. This is a particularly interesting element for me as a cider reviewer. I agree completely that how a company presents itself develops a cider drinker's expectations about the beverage before we even taste it.

My favorite part of his presentation was the video of Thatcher’s Cider at Glastonbury Festival. This festival is based on music but is simply a huge cultural gathering in Glastonbury that has 94 temporary bars for the duration of the festivities. The video reminded me of summer in the UK which can be magical (yes, I am a blatant Anglophile), but it also showed me one of my favorite things: cider being integrated seamlessly into life and good times. That’s my ideal vision for cider.

Then I visited the Trade Show, which was a fascinating gathering of various vendors and service providers all related to cider production and sales. The most fascinating to me were the glass and packaging design folks, but you could find everything there. Juice sellers, tank makers, fermentation aids, and enough cider related businesses to bemuse and intrigue all comers. 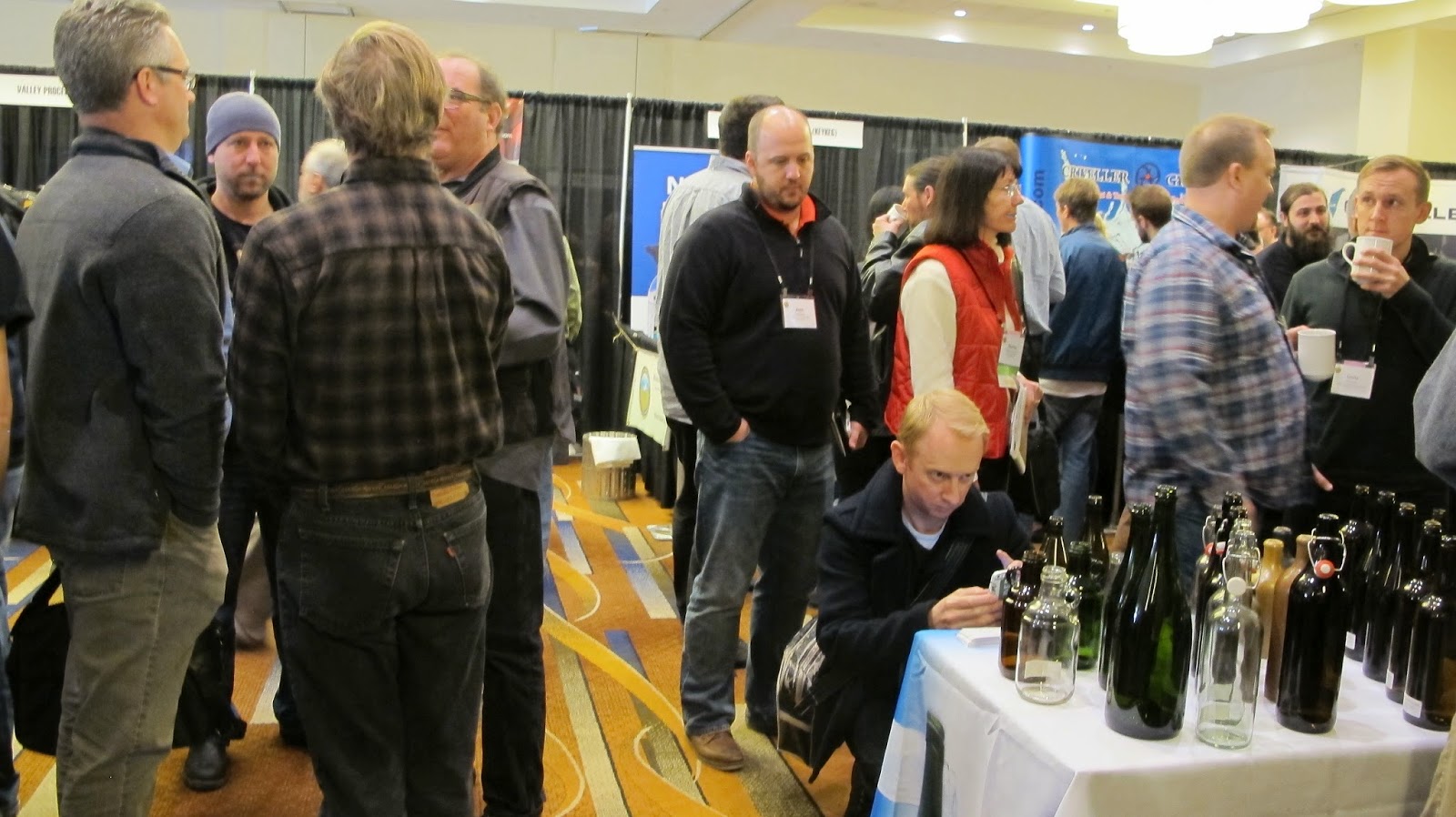 The first session I attended was "The US Cider Market Historical, Current & Projected" by Jeffrey House, of Ace Cider. I learned a ton about the ups and downs of cider's recent history. I was also heartily entertained by what a developed raconteur we had in Jeffrey House. He started not only Ace Cider but the first cider bar, Ace in the Hole in California in 1999! If attendees were taking only one piece of advice from House, it would be to stay local or region and not attempt to take your brand national.

We then had a learning lunch (with great food lots of good options for both meat eaters and vegetarians) followed by the 1st Annual USACM Cider Industry Awards. These awards were given to three individuals for their long service to the cider world: Ben Watson, Alan Shapiro, and Peter Mitchell. I highly recommend looking these fellows up because I cannot do justice to either their achievements or service in the space I have here. Suffice it to say that all of these people have spent years doing important work that allows cider to be where it is today and growing into what it will be in the future. 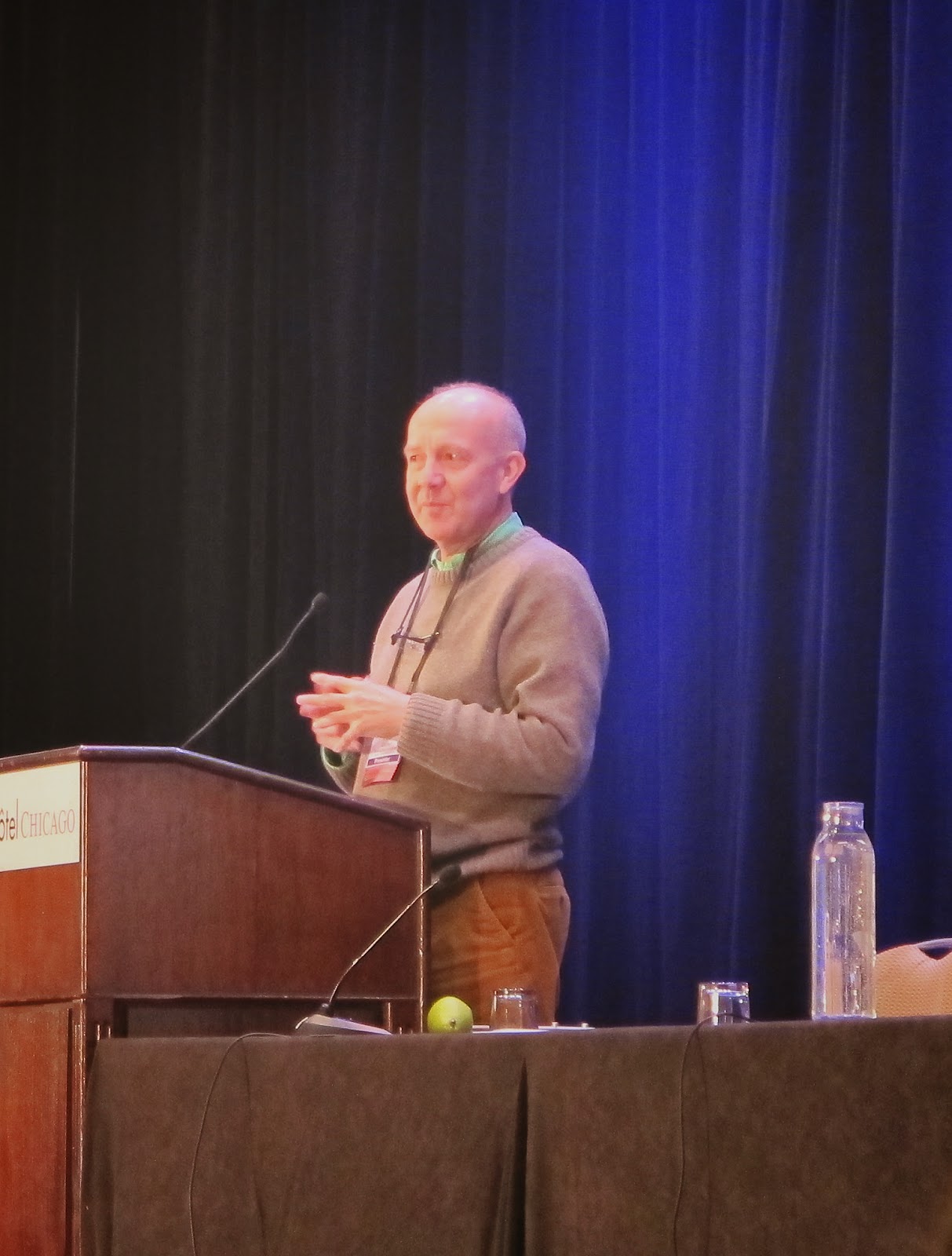 The 2014 US Apple Crop Update & 2015 Outlook with Mark Seetin of US Apple was filled with more and more detailed information about recent and upcoming apple crop issues than I knew existed!

John Hoyos led a panel called "The Honeymoon: Distribution Bliss" but it was more about distribution in general. People were riveted and had more questions than we had time to ask or hear answered. This was definitely one of the most educational sessions of the conference and one with the most motivated listeners.

Then I went to Jeff Cioletti's "From Press to Press, Getting Media Coverage for your Cider Brand" which was very practical nuts and bolts advice about how cider makers can relate to writers and media folks in ways that sidestep common difficulties that make brands less likely to receive media coverage. Attending as a cider writer, I found many commonalities between my experiences and those of both panelists, but I get the distinct feeling that this content was news to most attendees. So very useful.

But the last part of my day was probably my favorite, for silly reasons. I'd been really sad to miss out on the "Cheese and Cider Pairing Method" workshop with Jordan Edwards, but when I showed up to the same room just after to learn about Cider Styles from Eric West there were leftovers of all of the ciders and all of the cheeses! While we were waiting to get started, my whole table of folks did a quick and dirty recap of the previous panel and were thus freshly snacked and ready for West's presentation.

West did a fantastic job introducing to folks (some for the first time) the idea of cider styles and the concept that ciders can best be understood within the context of specific styles. This is something I believe in firmly. He also introduced the 2014 guidelines that the cider category has within the wider world of the BJCP. All really important stuff, presented interestingly.

Last but far from least was a session on cider mixology. As this is another topic dear to my heart, I had to be here. We talked about replacing white wine or champagne in traditional mixes with cider, we also discussed replacing seltzer with super dry super sparkling cider (watch out, this method makes powerful drinks). And we tried a few cider mixes including this beautiful old punch recipe, updated. 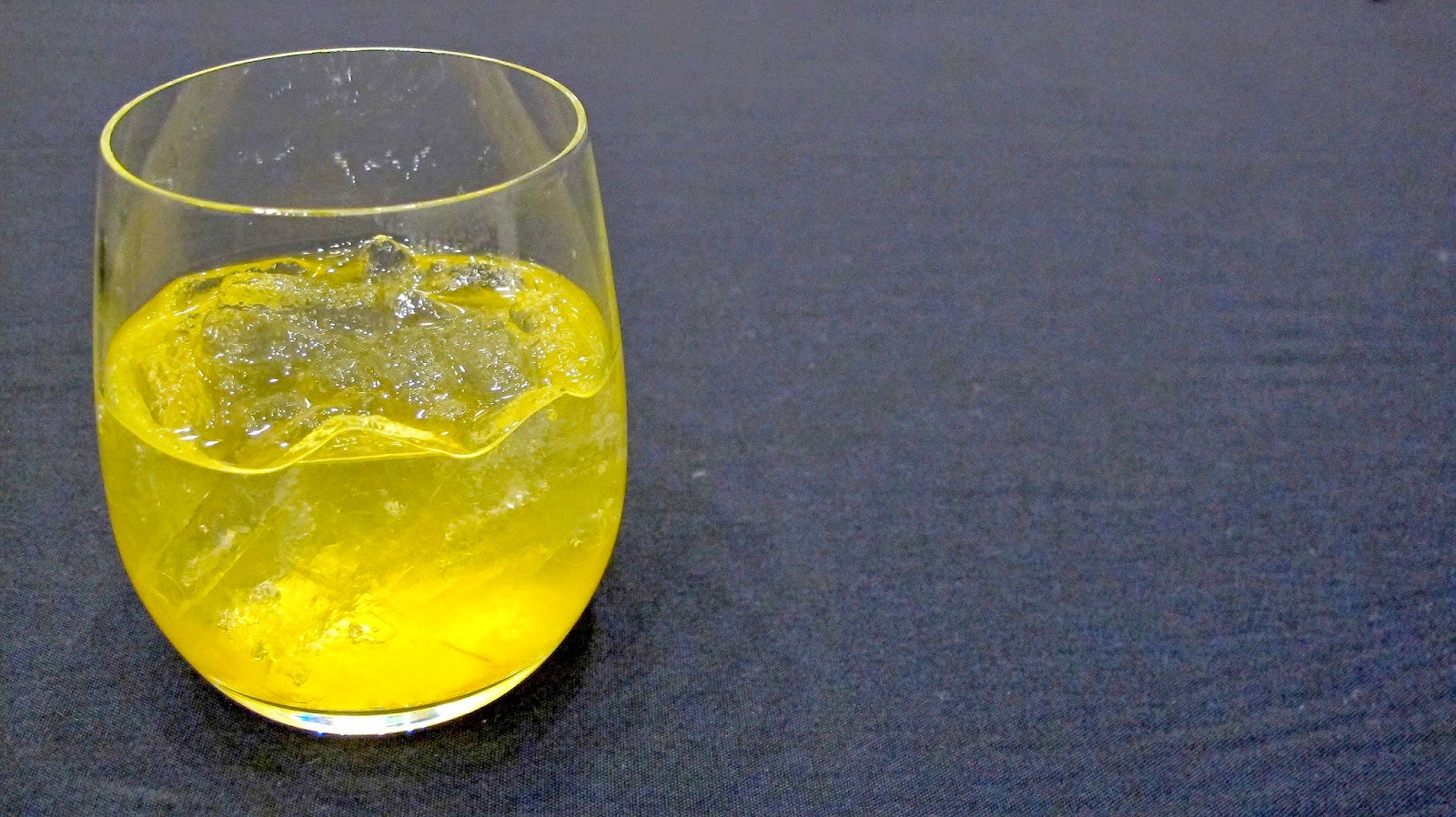 It was a glorious, nearly overwhelming day, so I went back to my hosts' adorable apartment and hung out in my pajamas. There were cider happenings all over the city that I missed, but ciderCON wore me out!
Posted by Meredith at 2:17 PM