Finally, finally, finally, spring has arrived. I've seen the sky and the ground and they both have colors beyond white and gray! Skies can be blue! The ground can be brown (also kinda green, but mostly brown). It's time to celebrate with a different sort of cider! Today I'm reviewing Magner's Irish Cider.
This is actually fairly exciting for be because I'd rather forgotten about Magner's. Years ago, they were one of the handfull of ciders that any given bar/pub might have in bottles (almost no one had cider on tap back then) so I had Magner's fairly regularly. But as my options expanded, I didn't drink Magner's as much. Now, because the Magner's folks were kind enough to send me two bottles, I'm gong to revisit this cider and really get to know it within the current cider scene. 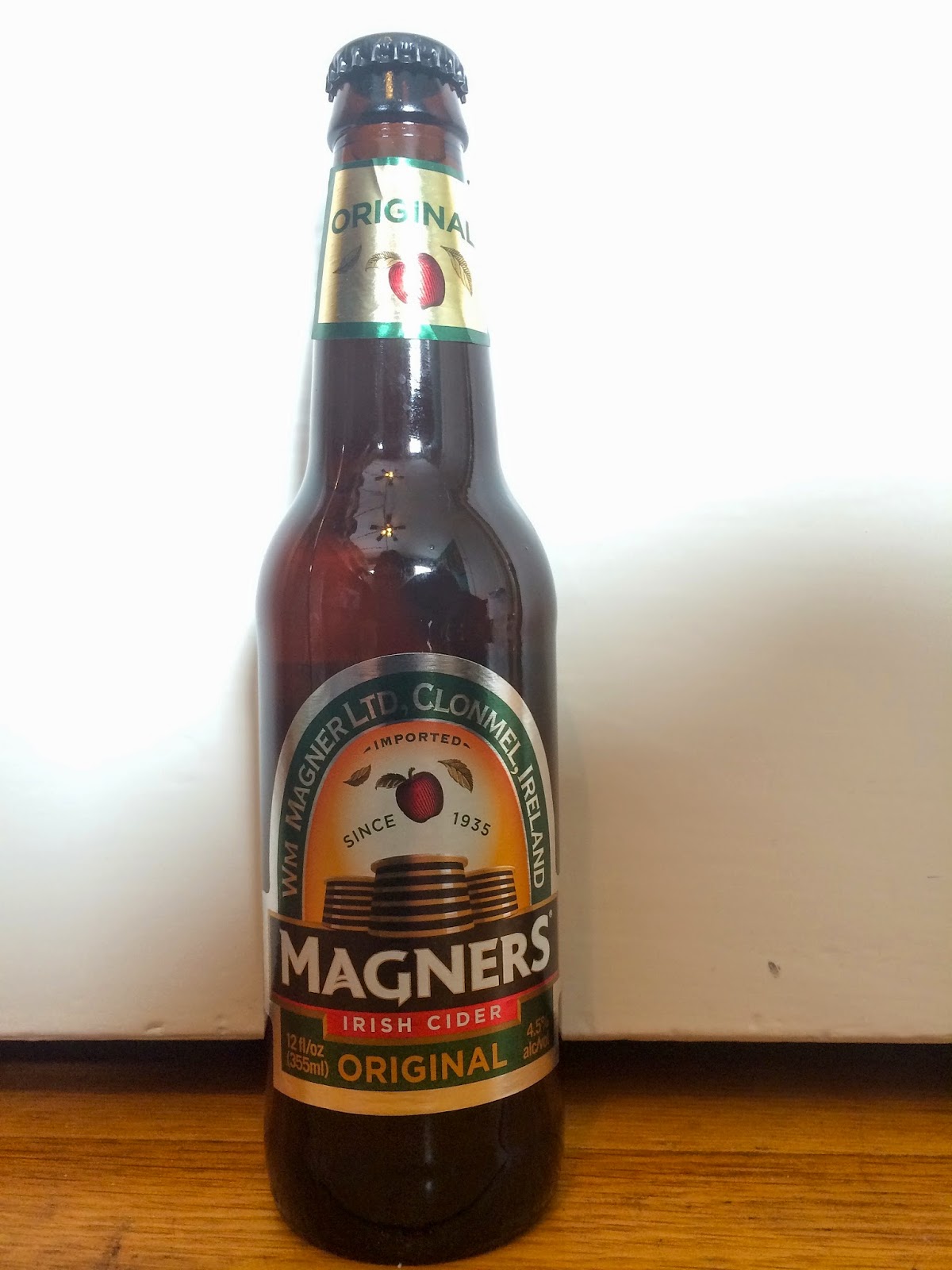 For a bit of background, I have to describe the front page of their website for folks who don't have the time to follow the link (For those who want to look for themselves: http://www.magners.com). The page has a black background relieved by two glowing ciders. They look unearthly, richly colored, radiant, each glass completely covered with condensation. Other than the ice, they look mouthwatering. This is paired with the phrase, "Made in the dark for a better taste". Wha? Weirdest cider tag line ever. Despite the photos, I'm not going to try my sample bottles over ice.

Here's some of what Magner's says about their own cider-making process.


We love making cider, but we reckon there’s only one way to do it properly. That’s why we’re still taking inspiration from the historic methods we used when we started making cider back in 1935. That’s part of the Magners taste.

So in this way we use 17 varieties of apples, waiting until they drop before pressing and filtering them in the traditional way.

We take time to ferment the cider and even more time to let it mature, up to 2 years in fact, tasting it along the way. Sure, there are faster ways of making cider, but then it wouldn’t be Magners.

I also emailed back and forth with a very helpful gentleman who told me about the apples Magner's grows in their orchards for their ciders. I've wondered about this for some some the larger companies in regions that grow traditional cider varietals for a long time. Here's what Brian had to say, "A number of varieties growing in our 150 acres of orchards include Michelin, Dabinett, Yarlington Mill, Bulmer’s Norman, Tremlett’s Bitter, Breakwell Seedling, Taylor’s, Harry Master’s Jersey, Bramley’s, Grenadier, Brown Thorn, Brown Snout, Vilberies, Improved Dove, Medaille d’Or, Reine des Pommes and Ashton Bitter." Now that's a list most United States cidermakers would freak out for because those include several of the high tannin apple varieties that are nearly impossible to get here. Also, I just need to take a moment to appreciate those names like Improved Dove and Brown Thorn; they are just lovely. 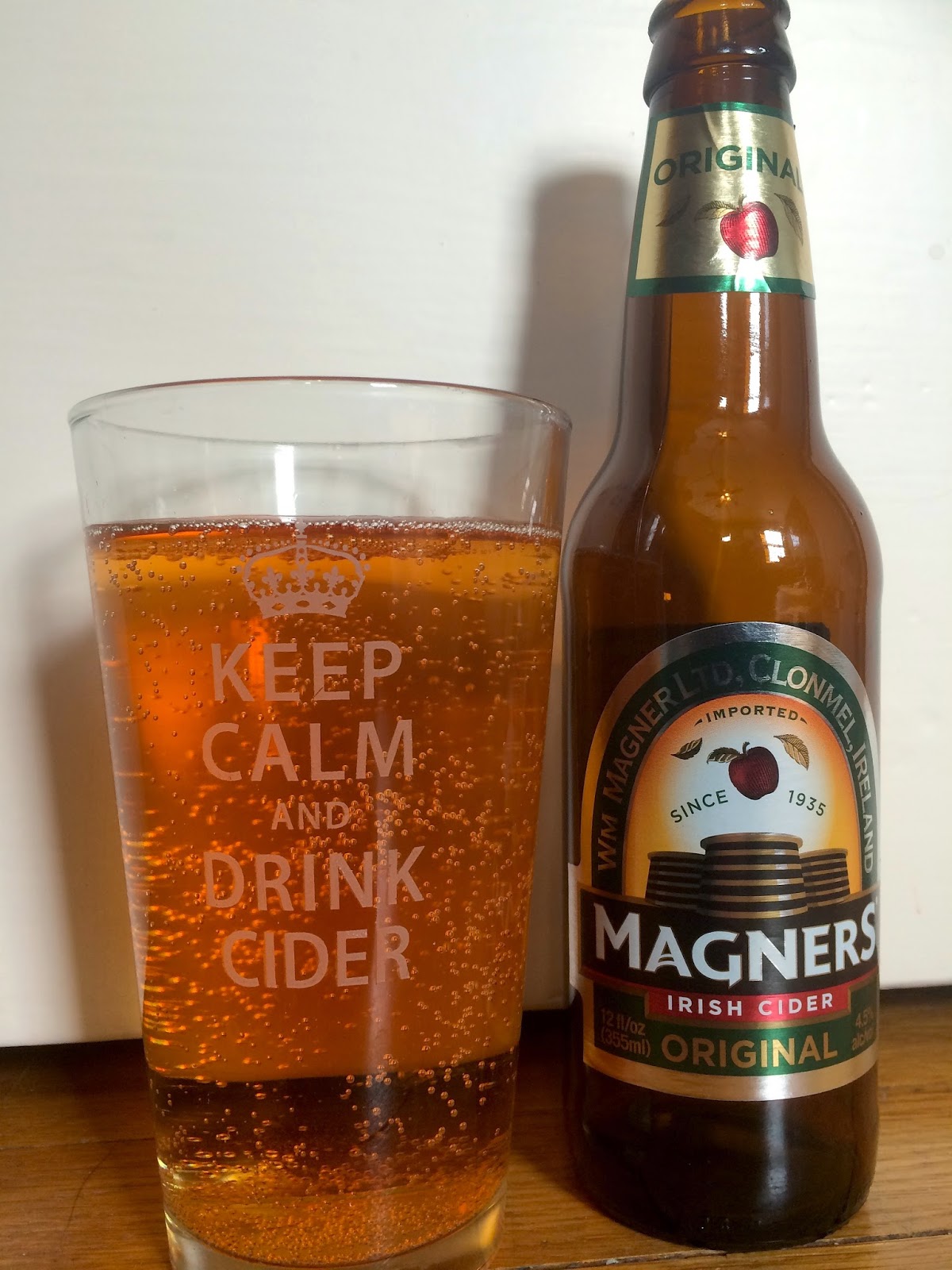 This cider shows lots of color but absolutely no haze or cloudiness. I'd describe the color as either pumpkin flesh or very black tea. This is definitely a color that implies the presence of tannins.

Magner's has a medium level of aroma, neither particularly shy and subtle nor tremendously outgoing. I am glad I poured mine into a glass, because I don't think consumed straight from the bottle, I would have gotten anything from it. The most interesting note is something that reminds me of bourbon aged ciders, but since Magner's has nothing to do with bourbon, I'm guess that it is something in the aging or barreling process that I'm smelling.

Magner's is not nearly as sweet as most six-pack ciders. Honestly, I'm shocked. I'd forgotten, or perhaps they've changed their recipe. I expected simple and sweet, but this is both more and less than that. Less sweet and more flavor.

I am pleased to report that as the Magner's appearance and smell led me to expect, this cider has tannins! They isn't out of control and might not even be noticeable if you drink it from the bottle or over ice, but they are there. I can also taste little bits of citrus, definitely lemon notes. In terms of the primary impression, I get applesauce-y apples loud and clear. Whatever was reminding me of bourbon in the smell doesn't really carry over  to the taste. Mixed in, I can also detect a cola note. Interesting and more varied than I expected. There's even a little brush with bitterness, but just a hint.

I definitely like this more than most six-pack ciders, but I do wish the flavor was more intense while still not being sweet. I enjoyed one of these with a fantastic sandwich with hummus and cheddar and oven dried tomatoes, and the other I had entirely on its own. It works well either way and I'm sure would also taste scrumptious with other foods.

Also, I don't want anyone to miss out on reading about the GLINTCAP results! This was the cider and perry competition that I helped to judge this past weekend. It is one of the largest and longest running in the world, and here are the results. I judged three flights in the Commercial Division: one of the New World Modern Ciders, New World Perries, and a flight of Pommeaux. The whole experience was wonderful, and I'm happy to say I have several ciders awarded silvers in my little collection and even a gold.