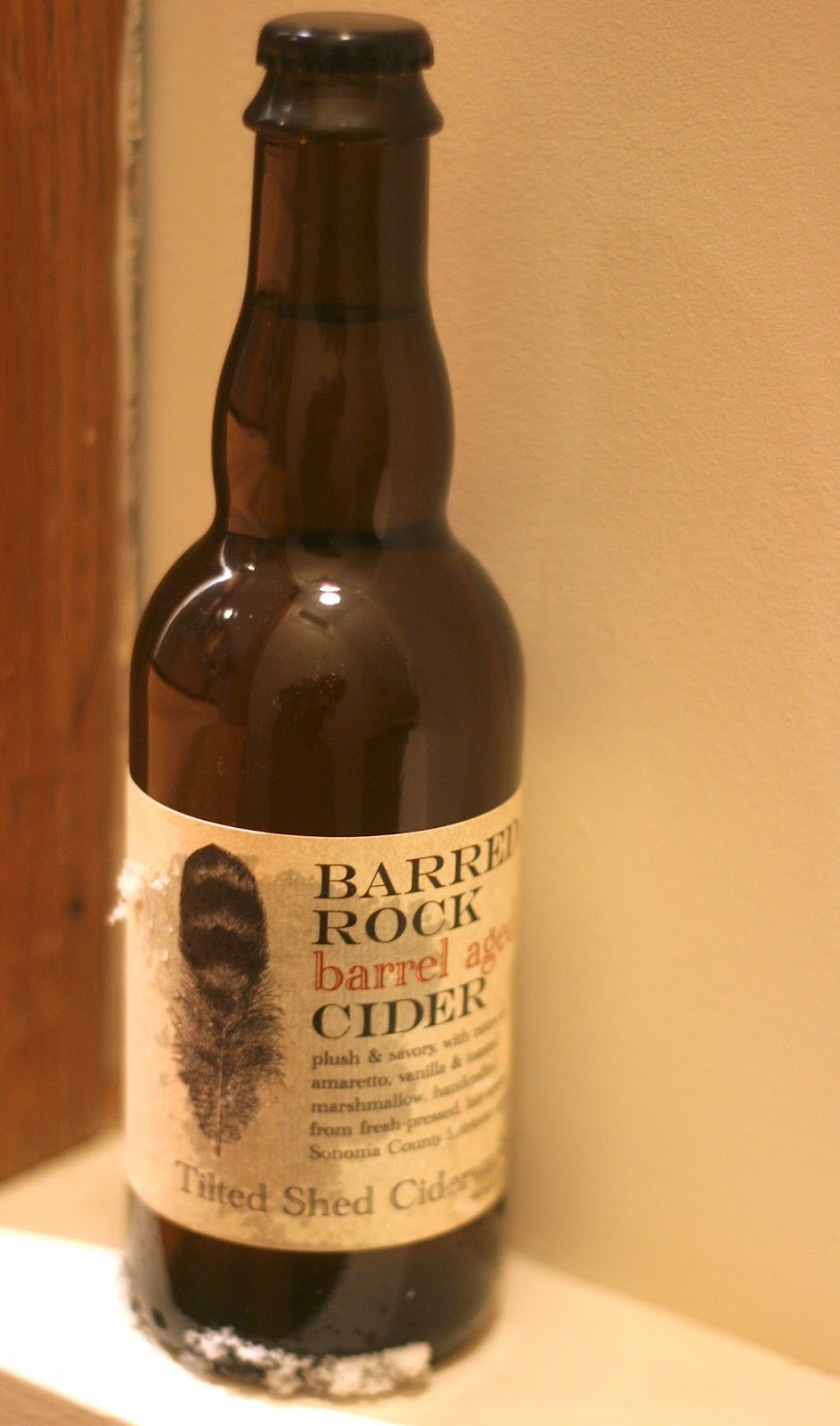 Perhaps this season's last review of cider that I think will be specifically appropriate for winter. Wow. We've come through a good one this year, but Spring is undeniably coming. Between snow storms things are really melting, plus I've seen both snow drops and crocus. But back when I drank this cider, Barred Rock Barrel Aged Cider, I chilled it outside in the two feet of snow on the ground, and I simply needed to serve it with cider bread and veggie chili. You can even see some snow clinging to the bottle.

I chose the Barred Rock Barrel Aged Cider by Tilted Shed Ciderworks to become part of my winter cider series because of its barrel aging. I've had a few barrel aged ciders before. What they tend to have in common is a strong sense of warmth, sometimes smoke, and interesting savory notes. It is a really neat sub-category.

Similarly I have a previous review of a Tilted Shed Cider that appeared earlier in this series. I sampled their January Barbeque which is a smoked cider. Here's a link to that post: http://alongcameacider.blogspot.com/2015/03/reviewing-ciders-for-winter-tilted.html

And you can read more about the company at their website: http://www.tiltedshed.com

Here's the official description with loads of info from Tilted Shed Ciderworks.


9% ABV • Only 84 (750ml) & 150 (375ml) cases produced • Released November 2014
A savory sipper, Barred Rock is a blend of late-season Sonoma County heirloom and cider apple varieties slowly fermented in the New England style, then aged for over 3 months in Tennessee bourbon barrels. Heady butterscotch on the nose, plush mouthfeel, clove, amaretto, and vanilla notes, and a long, rich finish. This cider was fermented to dryness, no backsweetening, so your palate will experience all that the barrel aging has to offer, without any cloying effects.  This is dessert in a glass, but it's also delectable with apple crisp, figs, and rich cheeses. Let this warm up to 60 degrees or more, don't be afraid. The warmer, the more decadent. Serve in a white wine glass. 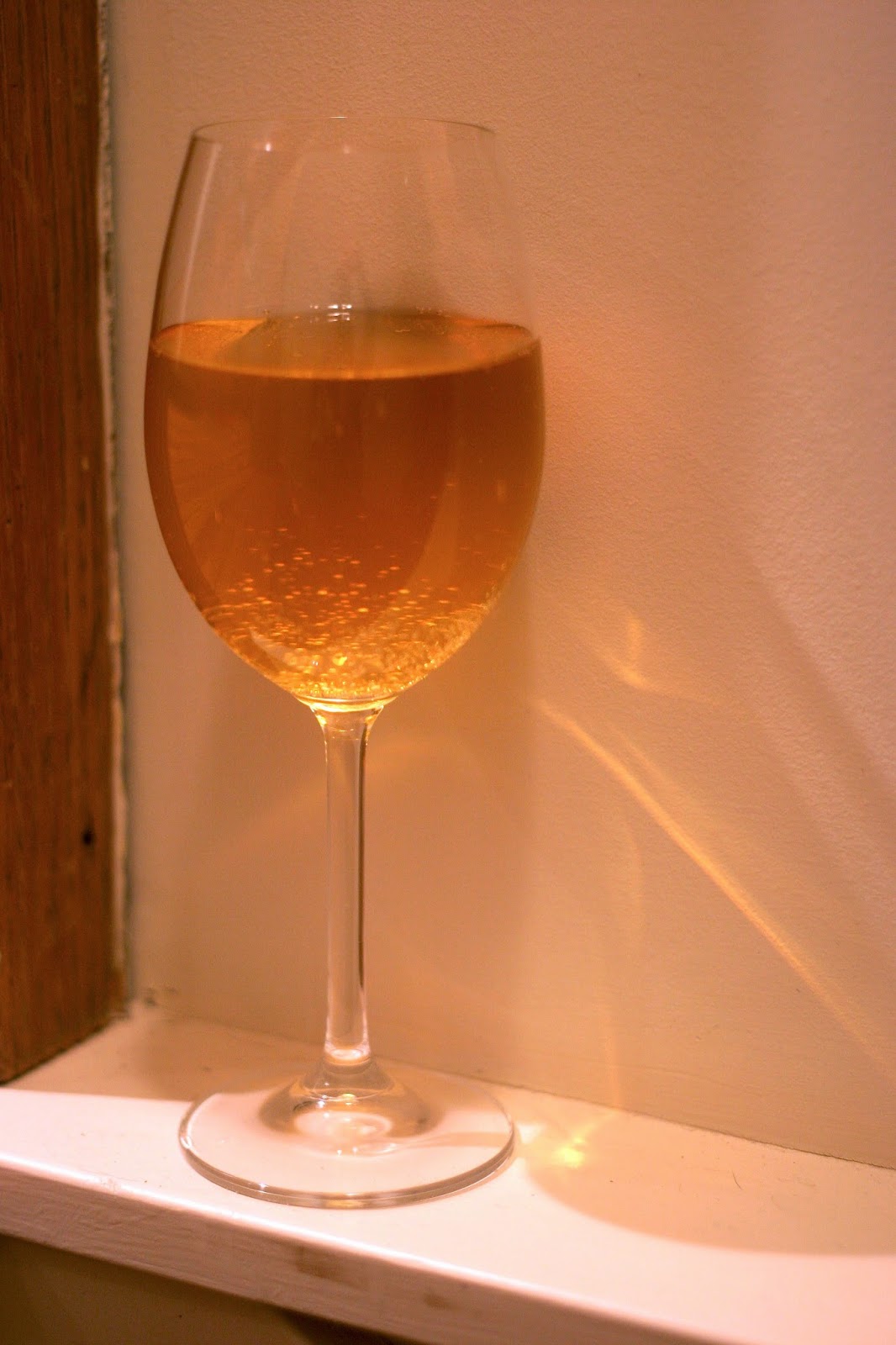 As recommended, I found a white wine glass for this cider and the glass really shows it off visually. Gorgeous! Just off brilliant. The bubbles travel in the tiniest lines up to the top and mostly show just at the bottom of the glass, like someone tossed a handful of gold pebbles into the glass. The color reminds me of tangerines, orange leaves in the fall, and the shiniest of new pennies.

The Barred Rock smells like whiskey barrels and s'mores, so a very grownup camping trip! I also the distinct sweetness of aroma that makes me think of marshmallow, syrup, and fruity depths. Separately I can smell hints of tannins which so often come across to me as dust and minerals.

This is hard to quantify as either sweet or dry because it has so much going on that is neither. But I'll call it dry yet extremely flavorful.

The Barred Rock plays all over with flavors of wood and caramel and booze notes. It has a sense of whiskey barrel burn, which isn't really a plus for me but might be for some folks. I do like the dryness and texture; dry dry bubbliness is something I dig. Whoa, continuing, I can barely get over how boozy this is. I'm glad I'm drinking it with food! My pairings are cider bread and veggie chili which I would recommend with this cider. And it is definitely warming, making it a perfect way to wrap up this list of ciders for winter!
Posted by Meredith at 4:54 AM