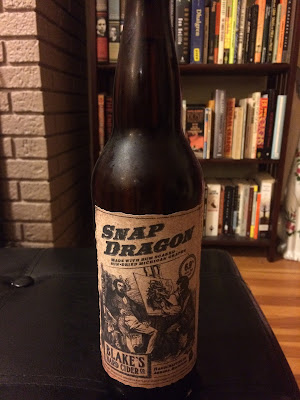 I feel that hibernation season and the holidays are both upon us. Perhaps, I am not alone in feeling like we’re living in the land of eternal 9pm, and more offers for ways to spend our time than we have time to spend. This time is chaotic and demanding, but it’s also full of surprises and little lights in the cold dark. I'll take all the brightness the world can muster, even if I'm run off my feet. On one such a night recently, some friends and I took a breath and quiet night for ourselves to drink cider, catch up, and generally be cozy.

One of the select ciders that evening was Blake's Hard Cider's Snapdragon. Blake's Hard Cider comes from Armada, Michigan, where the company produces 19 varieties of cider, runs a taproom and restaurant, and grows 45600 apple trees. I found out these little nuggets of information on the website, and there are descriptions for all of their ciders there also.

You can learn more about the company on the website http://www.blakeshardcider.com/

My previous reviews of Blake's have included:

The Tonic (a ginger and cucumber cider): http://alongcameacider.blogspot.com/2017/03/cider-review-blakes-hard-cider-companys.html

El Chavo (a cider with Mango and Habenero): http://alongcameacider.blogspot.com/2015/11/cider-review-blakes-hard-cider-companys.html

I got my bottle in a cider trade with an illustrius friend (Hi Darlene!) who was travelling that direction.

Intentionally burning your mouth by plucking a molten hot raisin out of a fire and eating it used to be considered a fun game enjoyed all over the world, in fact people would do it in an attempt to mimic the face of a dragon. Snap Dragon, a game played only by the brave for centuries has now been captured in this handcrafted concoction. Enjoy the warm taste of burnt rum-raisins with the crisp taste of apples from Blake’s. 6.9% ALC. BY VOL.

and from the bottle:


Here at Blake’s Hard Cider Co. we’re steeped in tradition and as such our games are a bit old fashioned, but no less sophisticated. Our own version of the famous Snap-Dragon game involved the blue flames of rum from which the raisins used in our cider were skillfully procured. With their plumpness regained, a prolonged cider bath developed a lingering rich finish with just the right hint of warmth as though the flames were clinging to the fruit all along. 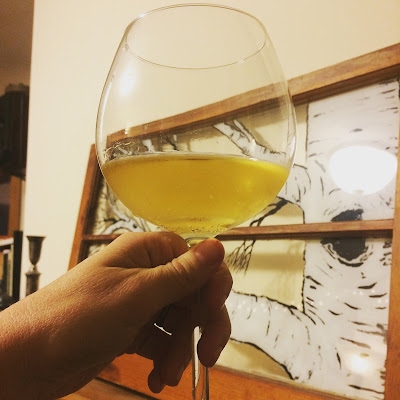 I don't see any bubbles in this slightly hazy cider. It looks warm and lazy like the color of warm straw tinted by the afternoon sun.

The Snapdragon smells floral, with lots of honey notes. I find the aromas pleasantly sweet with just an edge of bite to the smells. I’m guessing that comes from the rum, but I’ll know more once I taste it.

I found it sweet, but among my fellow sippers, there was some disagreement between sweet and semi-sweet. I think the rich boozy notes and the hints of rum might affect how we perceive what sweetness is there.

Tasting makes everything clearer, yes, we absolutely tasted raisin notes and a bit of booze, Concord grapes, and bruised apples. The most pronounced notes include honey, caramel, and flowers. Everyone did agree on how nicely balanced we found the cider.

The Snapdragon isn’t subtle, but its complex and I think pairing rum and raisin together did more for the cider than either of those additions would have done on its own. The mouthfeel is decidedly thick, to the point of feeling a bit syrupy after a small glass. It has enough acid to keep one going back for more sips, and the rum notes bring just a whiff of bitterness which helps that crucial balance. It’s a fun cider, and a perfect one for winter nights.

We paired it with goat cheese, crackers, and conversation. You would have to look long and hard to do better. 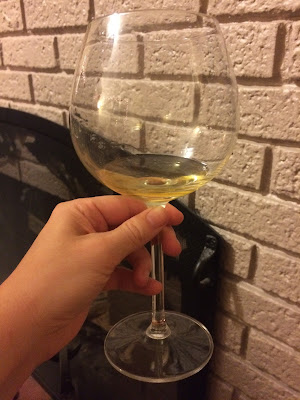