Cider and Cheese Pairings: A Cider Week Event with The Cellar D'Or

Wow, this post is so overdue: my apologies, especially to the faraway folks who were asking about the pairing choices months ago. Finally. Here we go. 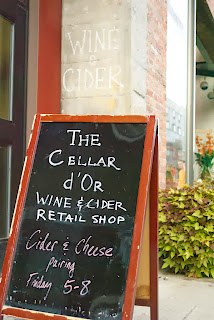 Back in October, I had the joy of doing some cider and cheese pairings with Mark of The Cellar D'Or.  This was a free tasting event by The Cellar D'Or for the good people of Ithaca (and surrounds) as a part of Finger Lakes Cider Week. The Cellar D'Or does a free tasting of some form or other at least once a week, usually on Friday evenings; so with this we managed to celebrate Cider Week and introduce a few more wine people to a variety of international ciders and cheeses. Putting this together with Mark was such a great time; he's a real asset to the cider and wine communities here in Ithaca. Thanks, Mark! 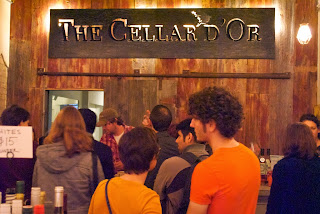 Here's what we paired. Some pairs were guided by the shared regional qualities and others just because they complemented one another well in aroma, taste, and texture. We also ordered these with some care because of the strong flavors going on both the ciders and cheeses. In general we tried to begin with more austere tastes and textures and allowed the choices to become more intense and aromatic toward the end. After all, it is easier for the palate to understand things getting crazier, but our mouths have a far harder time noting the nuances of something delicate after a fabulously taste-bud shredding. 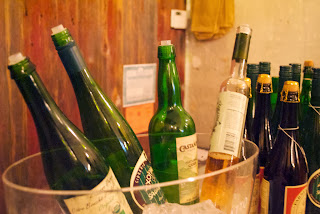 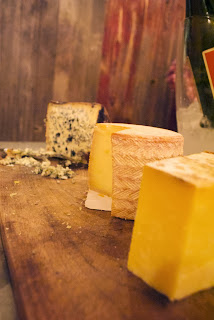 1. Cabot Clothbound Jasper Hill Cellar Cheddar with Farnum Hill's Semi-Dry Cider (until we ran out of course and switched to a few bottles of their Summer Cider). Their Semi-Dry has 7.4%ABV and would probably taste dry to most folks. Both Cabot Creamery and Farnum Hill are incredibly respected New England businesses that set standards for their respective products. The Cabot Clothbound is aged for a period of 10-14 months, giving it a sweet, nutty, tangy, caramel-tinged savoriness.

2. P'tit Basque with Txopinondo Sagarnoa Cider: both of these delicious treats come from the Basque region. The P'tit Basque cheese uses sheep's milk which has an astonishing percentage of flavor-giving fat: 45%. The cheese is fairly firm with an edible rind. The Txopinondo Cider is more tart and acidic with lots of citrus fruitiness. It's ABV has a more typical 6% after being matured on the lees for six months in barrels. 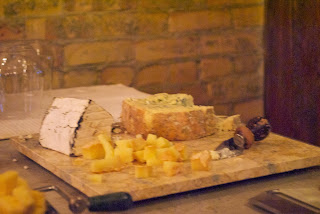 3. Valdeon with Castanon Natural Sidra: Spanish ciders and cheese both here. The Sidra goes a bit farther still in terms of its acidity; that is the most famous quality of this region's ciders.  It has an ABV of 6%. The Valdeon cheese is a Spanish blue that can use either cow or goat milk. The flavor is intense but clean. The cheese is always wrapped in sycamore, chesnut, or maple leaves before being sold. This is definitely the pairing that starts down the road to fiercer flavors.

4. Humbolt Fog with Etienne DuPont Organic Cider Brut 2011: this may have been the most popular pairing of the evening. The Humbolt Fog is a California goat cheese that uses vegetable ash, buttermilk, and fresh cream. It also offers the most gorgeous cream line when you cut into it. The Etienne Du Pont has many of the great qualities of Normany ciders. It is unpasteurized and uses no sulphites (great to know for those with sensitivities). It manages to offer both sweetness and slightly farmy complexity.

And for just a tiny while, we had a decadent Fourme D'Ambert with Eden's Vermont Ice Cider Heirloom Blend. The ice cider is much boozier with an ABV of 10% and the kind of intense sweetness known to fans of ice cider (15% residual sugar). The cheese is one of ancient lineage that goes back to the Roman empire. Now it comes from the Auverne region of France, and it uses cow's milk to create this semi-hard blue cheese. Amazing. 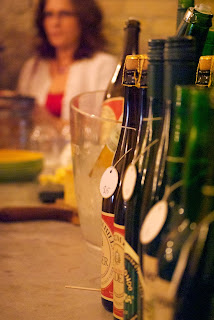 My friend and photographer, Sara, caught me mid-explanation here, but evidently I didn't stop moving very often. This is the cider fan in her natural habitat. The only unusual feature is that she has neither bottle nor glass in hand. 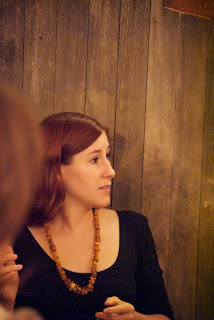 All Photos appear courtesy of Sara Kalla. My thanks to her for documenting this great time!
Posted by Meredith at 2:52 PM