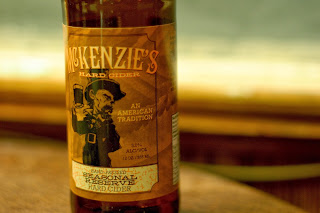 The last time anybody saw any McKenzie's Cider appear on this blog was when I reviewed their Lazy Lemon at the beginning of August. It was their special shandy-inspired cider for summer and you can remind yourself about it or check it out for the first time here: http://alongcameacider.blogspot.com/2013/08/cider-review-mckenzies-lazy-lemon.html I still really like the concept, but I wasn't bowled over by some of the specifics. I want to be fair though and acknowledge that what McKenzie's as a brand is going for is a specific style of very approachable, sweet, easy-drinking hard cider. That's the category; that's the style. To criticize it for doing that is missing the point.

McKenzie's original, which I reviewed in July, shows that they have a firm understanding of what they're going for. Here's that review, which was my first encounter with this Seneca, NY brand: http://alongcameacider.blogspot.com/2013/07/cider-review-mckenzies-hard-cider.html. That's where I write the most about the company, or you can visit their own website and learn what they have to say about themselves: http://www.mckenziesbeverages.com/

Today's review is about their fall seasonal release, McKenzie's Hand-Pressed Seasonal Reserve Hard Cider. It is their take on a bottled cider with mulling spices. McKenzie's describes it this way, "Flavored with Cinnamon and Nutmeg. Sip, smell and savor the rich, mulled spicy goodness of McKenzie's Seasonal Reserve. Aromatic fall flavors warm you from the inside out, and chase away the chill on those cold nights. Serve warm or cold, but only for a limited time!" I love mulled cider, and this is a beverage that needs sweetness with spice, so I've got high hopes that McKenzie's can really do this one right! 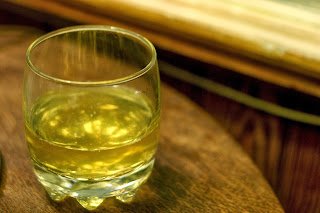 I can see so many bubbles on the sides of my glass that it took a while for me to determine if this was slightly hazy or brilliant. Hazy, as it turns out. The color of McKenzie's Seasonal Reserve for fall reminds me of applesauce. The photo doesn't show all the bubbles because they do start to dissipate steadily after a moment or two.

Spices dominate my impressions of the McKenzie's Seasonal Reserve in terms of aroma. I smell a dusty candied ginger smell, cinnamon, and cooked fruit. All of this comes together to form a picture that's very old timey and familiar. I don't know exactly why, but perhaps it is nutmeg, mace, or allspice notes that recall my grandmother's pumpkin pie. In any case, it is a good smell but not one very usual for cider.

The sweetness is totally integral to this drink. It needs to be sweet and the sweetness in this case is very enjoyable. This mulled cider inspired beverage needs to be a sweet spicy dessert and it is.

Spices! That's definitely what defines the Fall Seasonal from McKenzie's. It tastes a lot like a mulled cider but chilled and carbonated. So, in a way it feels very old fashioned but also non-traditonal. The mouthfeel is fairly light for such an intensely flavorful beverage. Medium carbonation is just right for this one. There is a touch of spice bitterness on the finish that reminds me of citrus peels or grapefruit but also of nutmeg.

Enjoy this while watching silly holiday movies on TV or bring the McKenzie's Seasonal Reserve to a cookie swap. Though it is marketed as fall, I can see this cider performing well through the holidays. Mulling spices go tremendously well with the cider McKenzie's is producing, and this is far and away my favorite cider of theirs that I've tried.
Posted by Meredith at 8:45 AM