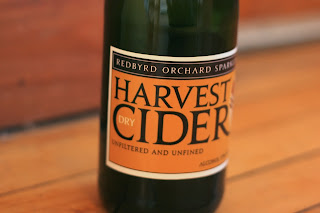 So exciting! I'm about to taste my first craft cider bottled from the 2013 harvest. I've had some tasty home brewed ciders, but Redbyrd Orchard Cider introduced their 2013 Harvest Cider more quickly than any other offerings from this year's bumper crop of apples.

First through a bit about Redbyrd Orchards. They are a very farm and orchard oriented cider company. They are also very small, independent, and locally oriented. All good things in my book. You can read about their ciders, process, and philosophy on their website: http://redbyrdorchardcider.com

One of the really neat things about Redbyrd is that they have a cider CSA (it stands for Community Supported Agriculture) Their CSA shares are on sale now. What a great concept. They explain how it all works on this page:
http://redbyrdorchardcider.com/2013/12/16/best-holiday-gift-ever-cider-csa-sign-up-begins-today/

Back in the fall, during Cider Week, I did my first review of a Redbyrd Cider, their Starblossom 21012. Feel free to check out that review here: http://alongcameacider.blogspot.com/2013/10/finger-lakes-cider-week-special-review.html I do a more thorough introduction to Redbyrd in that post. For now though, I'm ready to dive into this exciting new cider. 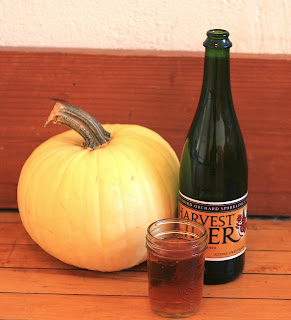 Luckily for us, Redbyrd Orchard Cider gives extensive and informative notes on all of their releases. I'll let them speak for themselves about the Harvest Cider before going into my own impressions.

Tasting Notes:  Harvest Cider 2013 is a blend of our first two pressings of the 2013 harvest season.   It is rich in color with aromas of bittersweet apple, rose hips, and peach skin. In the glass, Harvest Cider is lightly sparkling, or petillant, with a palate that is clean, crisp, and ripe with fresh fruit and minerals. This cider finishes with velvety tannins and racy acidity.

Production Notes:  Most ciders from the 2013 vintage will not be ready for release until late winter/early spring 2014. After primary fermentation, the cider from the first two pressings naturally clarified much quicker than usual.  Normally we wait for all of our tanks to finish fermentation to find the right blends to create balance and brightness in our ciders. These very first two tanks of cider were surprisingly balanced, aromatic, and bright, and in combination made for an early cider to be released. Racking off the top of the tanks allowed us to take only the clearest cider of each and then blend, force carbonate, and bottle. This cider is unfined and unfiltered.  This is cider in its purest form.


Alrighty, back to Along Came a Cider then. I love that Redbyrd tells us about their specific apple choices in the blend and about the process that allowed this cider to come into its own so early. Fascinating stuff. 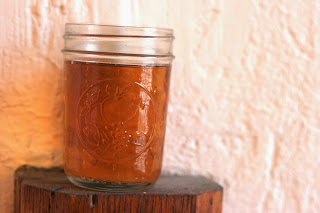 This is a exceptionally dark cider. To me it looks almost like maple syrup in the glass. Perhaps this is because it is both unfined and unfiltered? Or it could have to do with the apple choices. Either way, it is striking to see.

Not a lot of apple aroma. The scent of this cider is dominated by woodiness. I can detect some minerally almost metallic notes as well. I'm definitely predicting a dry cider based on this aroma.

Dry, and I do mean seriously dry. But with just a tiny hint of more fruitiness in the tasting than I got from smelling the Harvest 2013 cider. If you like sweet ciders, this is not for you.

This is just about the most sour cider I've ever tasted. The bright acidity knocks every other element out of the competition to get noticed. Yes I can still taste the woodiness and some citrus and apple fruitiness, but mostly this is an extremely zesty acidic cider. It isn't to my tastes as much as the 2012 Starblossom, honestly. But I can see some cider fans really getting into this style. I like the woodiness, but I wish it were more mellow. I do enjoy the level of carbonation on this.

What I would do though to maximize my enjoyment of this cider is to pair it with the right dish, something that needs some brightness. And believe me, this time of year there are a ton of heavy dishes that could use a pick me up. I think a creamy chowder would complement this cider very well. As for activities, pick this for snowed in night at home with just your nearest and dearest, who are presumably already cider fans. This is an unusual enough cider that you don't want to share it with any new cider converts necessarily. This is more for those who already like the more acidic and dry sides of the beverage.
Posted by Meredith at 12:14 PM