The past several cider reviews on my blog have all been from relatively small independent cideries, most of which have a real local focus on both their fruit sourcing and their sales. That's fine, but that doesn't cover the entirety of the cider scene. So, today I'm returning to one of the biggies. In fact, I'm reviewing the newest cider by the best-selling cider company in America, Angry Orchard.

I don't cover Angry Orchard very often. When I saw that Angry Orchard did two really interesting things in February, I wanted to cover both.

And just for those who haven't seen my previous reviews of Angry Orchard ciders, here they are:

http://alongcameacider.blogspot.com/2013/06/cider-review-angry-orchards-elderflower.html
First, they are perhaps the second cider to be offered for sale by an airline**. (I think. If I'm wrong, please let me know.) That's fabulous news as far as I am concerned. Being able to choose a cider at any place one can buy alcohol is really important for cider fans like me who really don't want a beer, cocktail, or wine. (That's not to say that I dislike all beer, all cocktails, and all wines. I don't. Some of each are a great, but mostly I'll drink cider or simply not drink.) You can read about this new development here: http://www.prnewswire.com/news-releases/angry-orchard-takes-flight-jetblue-brings-americas-number-one-hard-cider-on-board-300039261.html

The second is this; they made a hopped cider. I love hopped ciders. LOVE them. Angry Orchard calls theirs Hop'n Mad Apple. Here's what the bottle and label look like. 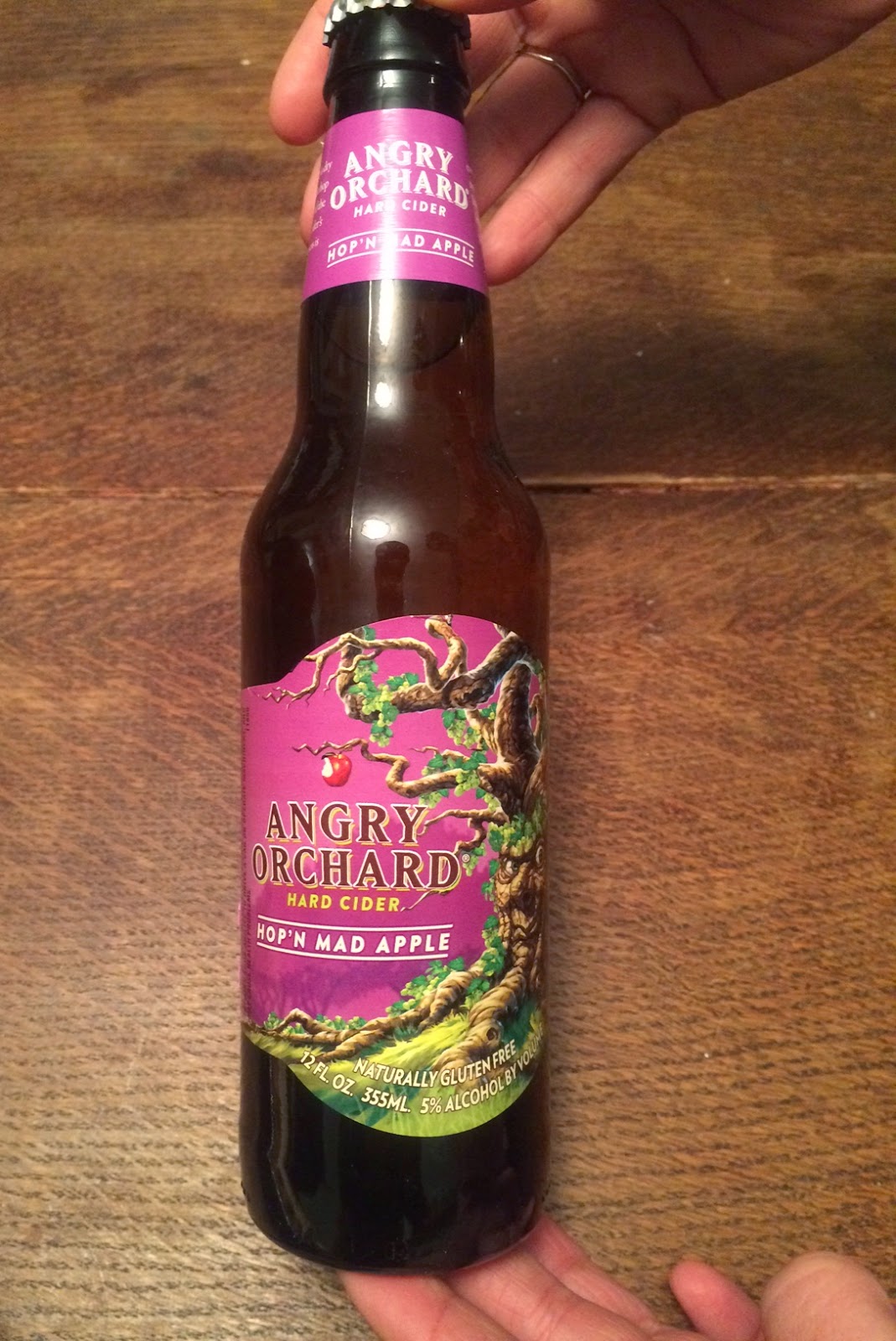 This is a link the Angry Orchard website has descriptions of all of their ciders, cider cocktails, food recipes involving their ciders, all sorts of goodies. http://angryorchard.com

If you want to check out what Angry Orchard says about their own Hop'n Mad Apple, "Our new hopped cider's bright apple sweetness is complemented by floral notes from the Strisselspalt hops and tropical notes from the Galaxy hops. All the hop goodness and none of the hop bitterness. Hop’N Mad Apple is available on draft in select cities and in 6-packs nationwide."

Because I don't know very much about hops, I looked up both of these varieties. Strisselspalt hops are from France and primarily used for aromas. Galaxy hops, on the other hand, come from Australia and can serve either for adding bitterness too a beverage or aroma. They are associated with notes of passionfruit, which sounds like the connection Angry Orchard is making in their mention of tropical notes. Real hop heads who wish to add to this information are encouraged to tell me more in the comments section. Seriously, share your knowledge. 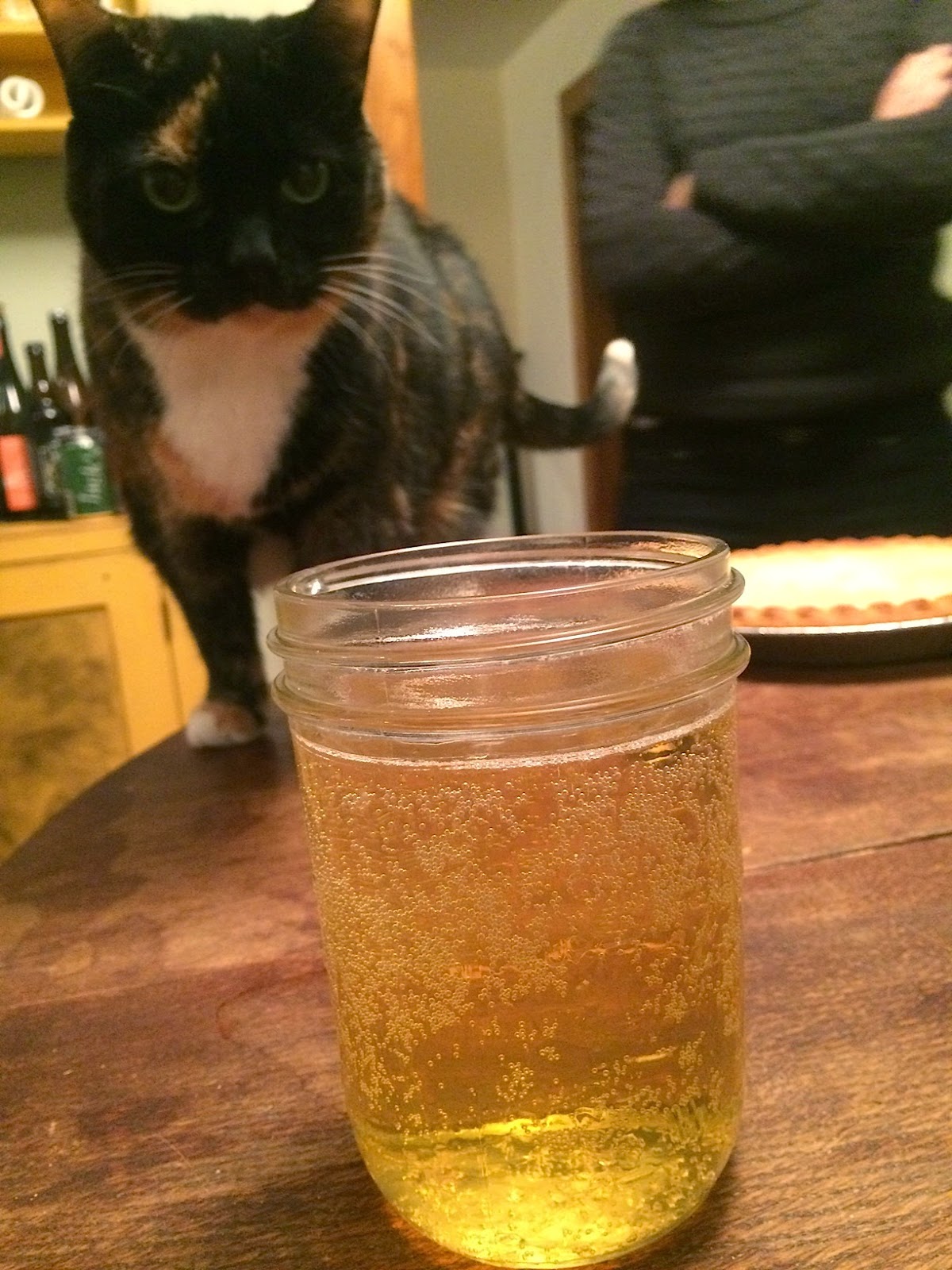 This color just looks like summery marigolds to me, but at this point I could be having winter hallucinations. Brilliant. The level of visible bubbles strikes me as decidedly above average.

I don't smell a lot of the citrus and pine that I associate with hopped ciders. But this also doesn't smell like a typical Angry Orchard cider either, it doesn't have a bit of something bitter in the smell along with the fruitiness. We'll see how it tastes.

Whoa! I guess I should not be surprised. Every Angry Orchard cider I've tasted has been sweet. This is no exception.

This tastes first like apple and grape Skittles, or if we're being honest, green and purple Skittles. I can taste a cornucopia of drugstore candy. Additionally, I get the tiniest whiff of bitterness, but not discretely hops; it's a bit chemically. The first wave of flavor hits and recedes speedily. The Hop'n Mad is highly acidic, enough to activate the salivary glands with pleasant twinges. The finish is flat, sweet, and long. My favorite part is the hint of textured astringence, with a nice velvet mouthfeel.  This cider offers a medium high level of carbonation. As I taste it again, it has a caramel note reminiscent of Dr. Pepper.  In a fast wave, one gets lots and lots of kinds of sweetness; to be fair, this is not a simple flavor—there's a lot going on—but it's all variations on sweet—plenty of cherry in particular.  The smell is 100% like the taste.  If you like Sprees or sour candy, you'll love this cider.

I had my Hop'n Mad Apple with a piece of raspberry pie and an episode of Call the Midwife. All while covered in quilts and cats. Pure winter indulgence, I admit it. But Ithaca just had its coldest February on record and one evening of that month was improved by good British TV, reasonably good pie, great cats, and trying a very different take on a hopped cider. This is an easy start with low low levels of bitterness if you've never tried a hopped cider before and want to steer clear of anything bitter.

**I originally thought they were the first until Darlene Hayes of Turn Them All Into Cider (http://allintocider.com/) shared with me the fact that Ace Ciders started being served on some Alaska Air flights in 2014. Thanks for the new info!
Posted by Meredith at 11:42 AM